The drachma supporters and the international reality 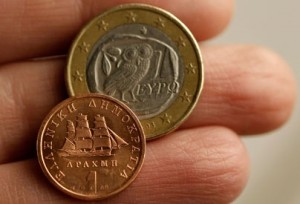 The Euro-Summit agreement of 12 July 2015 lays the foundations for Greece’s stay in the euro should the country meets international requirements. Further to this, it reflects the will of all eurozone countries to prevent a Grexit. This will goes beyond the borders of Europe and expands into other countries such as the USA and China. During dramatic discussions of previous weeks US President Barack Obama and Chinese Prime Minister Li Keqiang publicly supported the need for a solution within the eurozone framework.

Nonetheless, it is disappointing that many members of the Greek government continue to support Greece’s return to the drachma. Examples include members of the so-called Left Platform, Herostratus of modern Greecee former Finance Minister Yanis Varoufakis and Professor of Marxist theory Costas Lapavitsas. These politicians attempt to show that they are correct and right in their thinking, although all eurozone countries, the USA and China advocate for the opposite.

The supporters of the drachma tend to believe that Greece would be able to return to normalcy after a short period of instability if it returned to its old currency. Their argumentation is problematic. Greek companies, which rely on imports, already suffer heavily by capital controls and they would suffer even more being forced to use a new currency with a much lower value that might not be internationally recognised. In parallel with this, the supporters of the drachma argue that a new devalued currency could boost Greek exports. They probably deliberately ignore the internal devaluation which has started to take place in Greece since 2010. More importantly, they fail to present study dealing with specific fields of the Greek economy which could attract investments in order to increase opportunities for higher exports.

In today’s period of populism in Greece, voices  advocating  for anti-conformist solutions gain ground. More time is needed until this dangerous phenomenon will come to an end. Rational and serious thinking will certainly prevails in the medium-term.