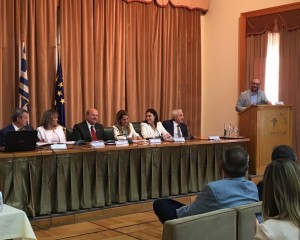 There is nothing like being at a port if you want to broaden your horizons. Staring out across the sea, observing the cargo and people traversing the water, it becomes much easier to envisage the ways in which governments, businesses and individuals can connect through trade. The ships docking and departing resemble bees carrying the pollen to the hive. But apart from goods, they are transporting the ideas that help create cross-pollination between countries, nurturing entrepreneurship and stronger ties.

There could have been no more appropriate a setting, therefore, than Piraeus last Monday for a conference aimed at fostering a discussion about how Greece’s largest port can contribute to growth opportunities for the country. Piraeus is already the subject of major foreign investment thanks to Chinese giant Cosco and the shipping firm has plans to keep expanding its presence and the role of the port.

The key question addressed during the conference, which was jointly organized by the Piraeus Chamber of Commerce and Industry (PCCI) and the Nice-based International Center for European Studies (CIFE), was how Piraeus – and the spirit of entrepreneurship it embodies – could become a conduit for economic growth in Greece.

The potential for trade with China is already well-established, and was recently examined in this column, thanks to Beijing’s “One Belt, One Road” strategy to create new trade routes for Chinese goods, with Piraeus becoming an increasingly significant hub in this process. An area of the world that is not so much at the forefront of Greek thinking when it comes to trading and investment opportunities is Latin America.

Five ambassadors – from Mexico, Peru, Chile, Uruguay and Argentina – took part in last Monday’s discussion with the aim of identifying areas of potential cooperation. Their case was strengthened by the fact that Latin America, especially the countries in question, has grown in importance as a trading partner for Greece.

Greek exports to the five countries increased by 23.3 percent in 2015, according to Greek Foreign Ministry data. This includes a 30.3 percent increase in the case of Mexico and a 21.3 percent rise in Argentina, where cement and tobacco make up almost half of Greek exports. Overall, the total value of exports to the five Latin American countries may not seem like a lot (214 million euros) but its upward trajectory at a time when Greek exports have been dropping for months on end cannot be ignored. Last year the value of exports from Greece to Mexico, Peru, Chile, Uruguay and Argentina represented 0.83 percent of the total, compared to 0.64 a year earlier.

Also last year, there was a 6.3 percent increase in the number of visitors from Argentina, which along with Mexico accounted for more than 50,000 visitors to Greece during 2015. Another 46,050 came from other Latin American countries. It is clear, though, that in terms of trade, investments and tourism, there is the potential for much greater achievements.

“During recent years, Greek businessmen have shown a renewed interest in Mexico, mainly due to the diversification and outwards looking process that the Greek economy is currently undergoing,” the Mexican Ambassador to Greece, Tarcisio Navarrete Montes de Oca, told Kathimerini English Edition.

“We warmly welcome this interest and we encourage it. Last year the Greek-Latin American Business Council organized a very successful business mission of Greek entrepreneurs to Latin America (Argentina, Brazil, Mexico and Peru). In 2017, a new trip may take place, focusing on the strategic contacts already established.”

Globally, Latin America is becoming an increasingly significant area for trade and is demanding greater attention from Greek exporters during a period when traditional markets, such as the eurozone, are struggling economically. In 2000, bilateral trade between China and Latin America was worth $12 billion but by 2013, that figure had risen to $289 billion. Last year China pledged to invest $250 billion in Latin America in the next decade, while Chinese companies invested a total of $41.8 billion in infrastructure there from 2013 to 2015. Meanwhile, the middle class in many Latin American countries is expanding and the use of technology is spreading.

“Mexico is a country open to the world, with 45 free trade agreements already signed,” said Ambassador Navarrete. “We are leaders in key sectors such as aerospace, automotive, medical devices and electronics. Furthermore, our country enjoys macroeconomic and political stability, low inflation, strategic location, excellent supply chains and a talented, competitive and young workforce.”

There are indications that Greece’s decision makers are gradually realizing the significance of Latin America for future trade and investment. Last year, Greece obtained observer status at the Pacific Alliance, a trade bloc created by Chile, Colombia, Mexico and Peru in 2011, comprising a total population of 214 million, an accumulated gross domestic product equal to the eighth largest economy in the world and an average growth rate of 3.8 percent last year.

“It is a free trade bloc and, therefore, if a Greek product enters Mexico it can potentially reach all the consumers of the Pacific Alliance,” said Navarrete. “Besides, the Pacific Alliance is an important platform for Greece, as observer member state, to be connected with the rest of the world, especially with China and all the Asian region.”

However, this is not just one-way traffic. It is not simply about the goods that Greece can sell to growing Latin American economies but also what growth-inducing ideas it can pick up from them, as well as attracting interest from investors in those countries who are increasingly broadening their reach.

Chile, for instance, allows foreign investors to sign an agreement that will keep their tax rate stable for 10 years. It also permits the tax-free repatriation of capital equal to the value of the investment that has been made by foreign investors in Chile.

As for Latin Americans investing in Greece and transferring their know-how, Ambassador Navarrete believes that the tourism sector offers the potential for such a relationship to blossom.

“The interest of the Mexican businessmen in Greece is mainly focused on tourism and tourism-related sectors,” he said. “We believe this is a potential area of economic cooperation that can be further developed for the benefit of both countries. Mexico was the ninth worldwide touristic destination in 2015, with arrivals accounting for 32.1 million foreign tourists.”

Perhaps these are all signs that in its search for growth and investment opportunities, the time has come for Greece to look further afield, to broaden its horizons.