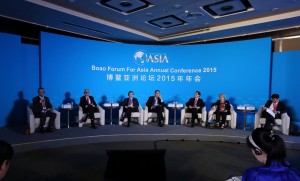 The Boao Forum for Asia, which opened on Thursday 26 March 2015, aims to search for the common interests of major Asian economies and discuss how to seek a common future through multilateral cooperation, Zhou Wenzhong, Boao Forum secretary-general, said on Wednesday. The four-day forum in South China’s Hainan Province is expected to further discuss regional collaboration initiatives such as the “One Belt, One Road” raised by Chinese President Xi Jinping, and other issues like industrial transformation and political security.

President Xi is scheduled to attend the forum and deliver a keynote speech at the opening plenary on Saturday. This is Xi’s third year to attend the forum.With the theme, “Asia’s New Future: Towards a Community of Common Destiny,” the forum is expected to attract about 2,000 delegates, and conduct 77 formal discussions. The “One Belt, One Road” initiatives of the Chinese government to promote regional collaboration will be a hot issue during the forum.

Media reports said earlier this week that the government may release the implementation plan for the initiatives during the forum and details on major infrastructure projects will also be included. Two forums on the initiatives will be held at this year’s event. And in a forum on Friday, Hong Kong chief executive Leung Chun-ying will present and discuss the role of Hong Kong in the  initiatives.”One Belt, One Road” refers to the Silk Road Economic Belt and the 21st Century Maritime Silk Road initiatives brought up by President Xi in 2013. Aimed at strengthening regional connectivity through the reinforcement of transport infrastructure, investment and trade, financial cooperation and cultural exchanges, the two initiatives call for the collective efforts of countries along the routes.

Also, as the March 31 deadline China has set for countries who wish to join the Asian Infrastructure Investment Bank (AIIB) approaches, the China-led regional financial institution will also be a focus at the Boao Forum, experts noted.So far, 34 major economies have expressed their intention to join the AIIB as founding members. A panel discussion on the role of the AIIB and the New Development Bank set up by China, Brazil, Russia, India and South Africa (BRICS) will be held on Saturday.

“As Asia grows into an important engine for the world economy, the Boao Forum’s significance is also growing.  Not only for Asia, it has become an event of global significance,” Huang Wei, an expert at the Institute of World Economics and Politics at the Chinese Academy of Social Sciences, told the Global Times on Wednesday. This year’s Boao Forum will also see the attendance of the greatest number of high-ranking officials. The presidents of Armenia, Austria, Indonesia, Nepal, Uganda and Zambia will attend the annual meeting. Other guests include the governor-general of Australia, prime ministers from Malaysia, Qatar and Sweden, as well as Russian First Deputy Prime Minister Igor Shuvalov.