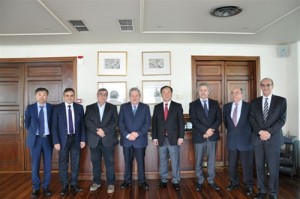 A few days ago the annual meeting of  China Classification Society (CCS) Mediterranean Committee was held in Athens. Mr Simeon P. Palios was elected as the new Chairman and three vice chairmen were also elected. It is the first time for the Committee to include Cypriot ship owners as its members. Mr Papageorgiou was elected as the Chairman for the Technical Advisory Committee established under CCS Mediterranean Committee.

President Sun Licheng delivered the opening speech at the meeting. He said that CCS Mediterranean Committee has played an important role in CCS business development in Greece; especially in recent years more and more Greek and Cypriot ship owners gave their support and trust in CCS  with their large-size newbuildings VLCCS, Capsize and other ship types choosing CCS class. As an important bridge of Sino-Hellenic and Sino-Cypriot maritime cooperation, CCS Mediterranean Committee will play a unique role in China’s strategic “21st Century Maritime Silk Road” initiative in order to promote cooperation and exchange between the Hellenic and Cypriot shipping and the Chinese shipping, shipbuilding and ship financing industries and to explore a broader development prospect for the cooperation between CCS and the shipping industries of the two countries.

Chinese Ambassador to Greece Mr Zou Xiaoli together with Commercial Counselor Ms Zhou Ruojun was invited to participate in the event and presented his address.

You can read here the speech of Ambassador Zou Xiaoli.