China and the ruble crisis 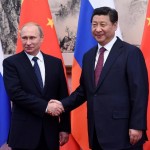 The current economic crisis in Russia is perceived by Western media as a personal defeat for President Vladimir Putin. It is also regarded as a success for the US, which managed to isolate him diplomatically by pushing its partners to apply tough sanctions and keeping oil prices at a very low level. The countries which at a first glance benefit by the new developments are oil-importing ones which are now able to spend less to cover their energy needs. China and other Asian states are a typical example. Further to this, many economists predict that world growth will be boosted by a possible increase of consumption in the wake of the fall in prices.

But we shouldn’t see the changing circumstances as all good, even for the West. Its impact is much larger and might cause serious consequences to several countries as well. It is not a coincidence that some stock markets are experiencing significant losses. In the US, for instance, the shale revolution could be slowed down because of the high cost as opposed to the declining oil prices internationally.

Additionally, the eurozone will possibly risk alarmingly low inflation in a period when almost all European states are seeing their trade with Russia dramatically diminishing due to the policy of sanctions. More importantly, foreign companies investing in Russia have already started to suffer. In particular, the weak ruble affects their day-to-day operations, delays the implementation of future projects and can lead to drastic measures such as a reduction of the number of employees if not their departure from the country.

Russia is not considered as part of the problem but only as the exclusive responsible of its provocation and preservation. For politicians and scholars who interpret the world in Cold War terms, no change is required as Moscow has been correctly put under heavy pressure by Western powers. But for those who believe in the importance of multilateralism and enhanced cooperation among states, this model does not properly function.

It is here that the role of China is catalytic. China enjoys very good political and economic relations with Russia. This good status was confirmed in previous months when energy agreements were signed and currency swap deals were agreed. Subsequently, many international media are keen on discussing whether Beijing is prepared to financially assist Moscow.

Bloomberg, for instance, has referred to recent remarks made by Chinese Premier Li Keqiang during a Shanghai Cooperation Organization meeting in Astana that China would be prepared to offer help to other countries as a matter of principle. China used $25 billion of its foreign exchange reserves to support oil supply from a Sino-Russian pipeline and $67.3 billion to boost the supply of crude oil from Russia.

Whether Beijing will provide financial assistance to Moscow remains a hypothetical question that will highly depend on the will of the latter to submit a request as well as the terms of negotiations. It should be clarified, however, that the existence of large reserves in China does not mean that it will embark on an unreasonable, excessive and permanent attempt to bailout other national economies. Extraordinary measures and decisions do not replace core guidelines in foreign policy which are based on realism.

Beijing acknowledges the importance of interdependence in the globalized era and therefore might be interested in preventing the collapse of the Russian economy. But it is not interested in intervening in other countries in such a way which threatens world order and creates new power games and rivalries.

In that regard, China can contribute to the stability of the Russian economy by going further than simply providing financial assistance. Benefiting by its good bilateral relations with Russia, it has a unique opportunity to mediate, break the ice between this country and the West and bring the two sides closer by fostering dialogue. A possible settlement on the Ukrainian crisis has to be the final objective.

This op-ed was published in Global Times