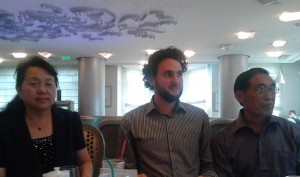 A delegation from the Euro-Asian Social Development Research Institute (EASDRI) of China’s State Council visited Athens on Thursday 11 June 2015. It was headed by Professor Zhou Dongyao, Professor  Li Shaojie and Professor Zhu Xiaozhong. The Chinese professors met with Dr George Tzogopoulos in order to exchange views on the evolution of the Greek crisis and EU’s approach regarding China.

The discussion was synthesised around existing difficulties for the privatization of the Piraeus Port Authority as well as the potential conflict of COSCO’s investments with EU competition law and ways this obstacle could be overcome. It also focused on the reasons why Brussels is skeptical on Beijing’s active  role in Europe and on the content of future reforms at the EU and eurozone levels.  At the end of the meeting, the Chinese delegation expressed a high interest in the project chinaandgreece.com suggesting that this initiative can bring China and Greece closer.