Is a Grexit possible? 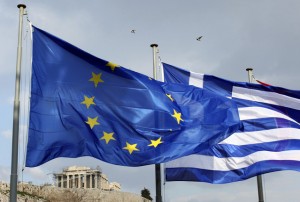 The beginning of 2015 will not be a smooth period for Europe. The Greek snap election on January 25 creates skepticism on future developments. In particular, a potential win of the leftist Syriza party might disrupt continuity in the implementation of the current bailout terms and structural reforms. Although the party has not yet clarified its official stance, several analysts and international media have started to re-employ the term “Grexit,” a possible exit of Greece from the eurozone, for the first time since early 2012.

Within this framework, various European politicians including President of the European Commission Jean Claude Juncker and Commissioner for Economic and Finance Affairs, Taxation and Customs Pierre Moscovici are attempting to influence Greek citizens to vote for mainstream political parties. They are doing so in order to attempt to avoid a new unknown adventure for Greece in case the country changes government after January 25. The same communication strategy had been also applied before the twin elections of May and June 2012, in which the conservative New Democracy eventually managed to win over Syriza.

The risk of a “Grexit” is real indeed. But the path to such an event is long and winding. First, Syriza needs to win the snap election. All polls give this party the lead, but in an atmosphere of political instability and fear for a potential return to the national currency, several voters, especially older ones, might finally hesitate to support a political change.

In the case of a Syriza win, the party will be immediately under pressure to form a coalition government as it will be probably unable to govern alone. This means that it will have to agree on a governance platform with some other elected parties putting some limits on its own policies.

Also, it remains to be seen whether the party will be finally prepared to follow a tough and aggressive line vis-à-vis Greece’s creditors, principally Germany. The main lesson learned from Greek politics since 2009 is that opposition parties tend to deliver easy promises in order to come to power, but then have to land into reality by applying for bailout terms.

Further to this, Cyprus, which in March 2013 attempted to look for an alternative of the rescue program proposed by the EU, failed to find necessary funds in Russia. Syriza will sooner or later encounter the difficulty of acquiring liquidity to cover economic needs by canceling all or part of Greece’s financial obligations.

The bad news for Greece is that it is now marginalized in the EU. Most European politicians stigmatize it by comparing its weakness to deliver to the success of Ireland and Portugal in remaining disciplined, applying bailout terms and returning to financial markets.

In parallel with this, the European Central Bank is theoretically able to block the metastasis of the Greek crisis to Italy and Spain by buying sovereign bonds of both. Although consideration of the constitutionality of European Central Bank President Mario Draghi’s relevant decision is still pending in the European Court of Justice, experts do not foresee legal obstacles in the future.

Does all this mean that the ongoing discussion is a unique Greek problem?  There are certainly unique characteristics in every reference to the Greek crisis since 2009. Nonetheless, a potential “Grexit” will be hardly confined to this country alone in spite of the preventive measures already taken.

For example, bank-runs will subsequently follow in other periphery countries threatening the stability of the eurozone while the debt of Greece will be significantly increased due to the natural devaluation of its new currency. The country will be thus unable to pay back its debts and European politicians will be put in the awkward position of admitting this hard reality in front of their national parliaments and audiences.

All in all, a “Grexit” will not be a welcome development for Greece, Europe and also other external powers including the US and China. So, Athens and Brussels are expected to make compromises to serve their own and collective interests. The Greek marathon cannot have a single winner or loser. Greece and Europe will win or lose together.

This article was published in Global Times