What now for the Greek government? 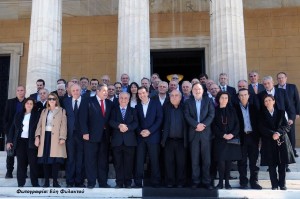 It is a usual phenomenon for Greek politicians, during the ongoing crisis, to land into reality after winning an election. Pre-election promises, populism and illusions are buried when unavoidable decisions have to be made at the international level. In that regard, the new Greek government’s request for an extension of the current bailout program is not surprising. The real challenge of the Greek coalition government led by SYRIZA (Coalition of the Radical Left), however, is not to sign documents and submit reform lists to its creditors but to deliver.

SYRIZA has now a unique opportunity. It can benefit from the existing flexibility of the bailout program and focus more on structural reforms than on austerity.Experience from the administration of previous Greek governments suggests that they had not been prepared to efficiently fight against tax-evasion and corruption. SYRIZA, which had not governed in the past, can possibly break the vicious circle.

The mission of the Greek government is difficult.On the one hand, it is encountered with an immediate liquidity problem as a result of the continuous reduction of state revenues. On the other hand, it needs to overcome internal obstacles as well as persuade the country’s creditors that it will practically keep its promises.

A period of four months does not allow much optimism for immediate changes but can be indicative of the political will for future ones. Additionally, contradicting voices heard within SYRIZA create skepticism as to whether the international commitments of the party can find domestic consensus.

Productive reconstruction, environment and energy minister Panagiotis Lafazanis, for example, rejects privatizations while the Greek government has promised not to reverse completed sales and respect the legal process of tenders already launched. Ambiguous messages naturally cause alarm in countries seeking to invest in Greece.

A careful analysis of the current situation shows that Greece has no room for unilateral actions. Every policy recommendation of the new government has to be agreed in co-ordination with the so-called troika, or “the Institutions” as it has been calling itself recently.

It is now the responsibility of Prime Minister Alexis Tsipras to build a united front and demonstrate that he can better implement structural reforms than his predecessors.The sooner Greece stops demonizing the bailout and foreign countries for its own problems, the earlier it can regain international confidence within the eurozone. There is no other way apart from accepting and publicly saying this truth.

This article was first published on Xinhua.