Sino-Greek relations back to normalcy 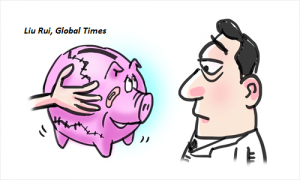 Sino-Greek relations have historically been marked by a spirit of solidarity and mutual trust. Recent years have also seen a drastic increase of Chinese investments in Greece as well as of Greek exports to China. This harmonious economic cooperation has let both countries seek new ways of collaboration as the continuous meetings of high-ranking officials demonstrate. Last year, for instance, Chinese President Xi Jinping met both his Greek counterpart Karolos Papoulias and former prime minister Antonis Samaras, and Premier Li Keqiang paid an official visit to Greece.

But economics goes hand-in-hand with politics. In that regard, the recent change of government in Greece has created alarm in China.

Not only before the election of January 26 but also in its immediate aftermath, some ministers of the new cabinet and other members of the governing Syriza party started to put into question the necessity of the privatization policy. Merchant Marine Deputy Minister Theodoros Dritsas, for example, said that the Greek government would be prepared to renegotiate the already signed agreement with COSCO on the port of Piraeus. Minister of Economy, Infrastructure, Shipping and Tourism George Stathakis announced that the process for the privatization of a 67 percent stake of the Piraeus Port Authority would be cancelled.

Beijing has attempted to discover whether Athens will take action to block its current and future investments. The Chinese Ministry of Commerce responded by asking Greek authorities to protect the legal interest of companies including COSCO. Additionally, for the first time during the ongoing economic crisis, even the Chinese media, traditionally positively predisposed toward Greece, the pain of austerity and the drama of its people, raised doubts on the motivations of the new leadership of the country.

In only a few days after the initial misunderstanding, the Greek government decided to accept commitments and follow a milder rhetoric. This realistic stance was confirmed during a phone call between Li and Tsipras on February 11.

Tsipras publicly expressed his support for Chinese investments on the occasion of the arrival of three Chinese frigates in Piraeus. As he said during a special event on February 19, he is “ready to support China’s links to Europe, with Greece serving as China’s gateway into Europe.” Some days later, Greek Finance Minister Yanis Varoufakis, accompanied by Zou, visited COSCO’s subsidiary Piraeus Container Terminal and praised what COSCO has achieved in Greece.

The Greek government is attempting to downplay fears and persuade China that it is continuity which will define its future policy choices.  Nevertheless, a careful analysis of the situation suggests that Beijing has no real reason to be concerned. Although some populist statements made domestically still create frustration not only for China but also for other countries including the US and Germany, Syriza has no real room for unilateral actions. Asking for an extension of the current bailout program, Varoufakis promised not to reverse sales that have been completed and to respect the legal process of tenders already launched. This was one of the necessary prerequisites he listed in an official letter he sent to Brussels.

German Finance Ministry spokesman Martin Jäger has asserted in a cynical but real way that the Greek government can only proceed by coming to agreements with its creditors, namely the European Central Bank, the European Commission and the International Monetary Fund.

It is thus the most likely scenario that the privatization of 67 percent of the Piraeus Port Authority, where COSCO belongs to the shortlisted bidders, will normally take place. As World Politics Review suggests, Greece’s reversal puts China’s Mediterranean plan back on track.

As far as the Greek government is concerned, it is facing hard politics as opposed to pre-election promises. The bad news for it is that it needs to abandon easy solutions. The good news is that it seems ready to adjust to developments and avoid the country’s isolation. The road will be long and difficult though.