Sino-Greek relations and the Piraeus port 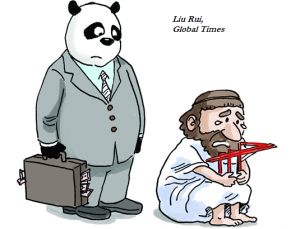 As the Boao Forum for Asia was taking place, a Greek delegation consisting of Deputy Prime Minister Yannis Dragasakis and Foreign Minister Nikos Kotzias was paying an official visit to China. Both developments are relevant to the Silk Road economic belt and the 21st century maritime Silk Road initiatives Beijing actively supports.But while the Boao forum was a good opportunity for Chinese President Xi Jinpin and other politicians and scholars to agree on ways of promoting regional cooperation, the visit of the Greek delegation was the moment of truth to end a previous misunderstanding.

The new Greek government has caused alarm in China because of its contradictory stance in proceeding with the privatization of the Piraeus Port Authority. In particular, for approximately two months since the end of January, it failed to clarify whether it would be prepared to sell a 67 percent stake to a Chinese firm as the previous government had planned. During his meeting with Chinese Vice-Premier Ma Kai, Dragasakis attempted to put an end to the confusion. He therefore asserted that the privatization of the Piraeus Port Authority will take place as usual and called interested companies, including Chinese firm COSCO, to submit offers.

Although Dragasakis says that the Greek state will also play a role in the future privatization by participating in a wider consortium, he seems determined to keep his word. This is what the new Greek government promised to its creditors, as well as what these creditors demanded, during ongoing negotiations to release the last tranche of the rescue package. But it is here where the problem begins. Even after the important meeting of Dragasakis with Ma, other members of the leftist Syriza party remain skeptical. Merchant Marine Deputy Minister Theodoros Dritsas, for instance, still focuses on the public character of the port of Piraeus by arguing that the government’s policy on its privatization criteria remains stable. In parallel with this, trade unions have also expressed their strong opposition and may organize demonstrations or strikes.

The experience of COSCO which first started to operate in Piraeus in 2009 suggests that vocal, opposing voices can create trouble for a short period of time but are unable to have an impact in the medium- and long-term. This is how COSCO has managed to succeed. Overcoming the initial obstacles, the company has persuaded the majority of Greek politicians as well as Greek citizens on its efficiency and contribution to the country’s commercial and geopolitical improvement.

The most important challenge for the new Greek government is to follow a consistent stance both domestically and internationally. An international company such as COSCO, which is interested in buying a 67 percent stake, might not disagree with a wider consortium should mutually accepted terms are discussed and agreed upon. As a matter of principle, for example, COSCO will not have an objection in reducing its potential stake from 67 percent provided it will be able to retain the control and management of the port.

The future of Sino-Greek relations will highly depend on COSCO’s investments in Piraeus. The Chinese company recently acknowledged the importance of Piraeus, along with those of Guangzhou and Xiamen, in increasing its profits for 2014. It is the Greek state that will finally decide not only on the future of the privatization of the Piraeus Port Authority but also on the company that will acquire the largest portion. Beijing, however, has clearly communicated to Athens that COSCO is the “head of the dragon” in its investment policy. This was perhaps the most important message Dragasakis and Kotzias received in China. It is now their turn to assess whether Greece should further benefit by the survival and revitalization of the ancient Silk Road.