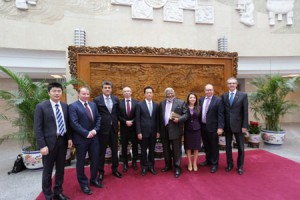 Vice Foreign Minister of China Wang Chao did recently meet with a delegation led by Chairman of the EU-China Friendship Group Nirj Deva of the European Parliament. This delegation was in China for a visit at the invitation of the Chinese People’s Association for Friendship with Foreign Countries (CPAFFC). Wang Chao spoke highly of the contributions made by Nirj Deva and the EU-China Friendship Group led by him to enhancing mutual understanding and friendly cooperation between China and the EU in the past years. He expressed that the China-EU relations are standing at the best period in history. Both sides are committed to forging the four major partnerships between China and the EU for peace, growth, reform and civilization, and the China-EU 2020 Strategic Agenda for Cooperation is earnestly implemented. As this year marks the 40th anniversary of the establishment of diplomatic relationship between China and the EU, China is willing to take this opportunity to join efforts with the EU to elevate China-EU relations to new highs by inheriting the past and ushering into the future. It is hoped that the EU-China Friendship Group will continue to play an important role and exert significant influence within the new European Parliament, so as to make new contributions to the development of China-EU relations.

Nirj Deva congratulated on the 40th anniversary of the establishment of EU-China diplomatic relationship, saying that the notable development achievements scored by China over the past 30-odd years since reform and opening-up are admirable. It conforms to the common interests of both sides for EU to constantly expand the mutually beneficial cooperation with China. The new European Parliament attaches importance to developing relations with China. The EU-China Friendship Group is willing to actively support both sides in intensifying dialogue and communication and in enhancing mutual understanding within the European Parliament, so as to make unremitting efforts to promote EU-China relations for greater development.

Both sides also had in-depth exchanges of views on China-EU trade, investment and other related topics.

Source: Mission of China to the EU