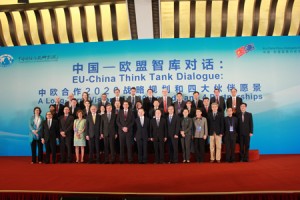 The European Union and China are elaborating on ways to further improve their relations. The EU-China 2020 Strategic Agenda for Cooperation provides the necessary framework for the implementation of actions which can bring both sides closer. In the interest of both the EU and China to foster dialogue a think tank conference was organised on 6 and 7 April in Beijing which gave the opportunity to European and Chinese scholars to exchange views for the future. As fas as Europe is concerned, 12 member states were invited, including Greece and think tank ELIAMEP. Dr George Tzogopoulos represented the country talking about student exchanges, media co-operation and the need for a better understanding.

The Beijing conference confirmed the will of representatives from both the EU and China to enhance their cooperation. Although some differences in the logic and argumentation of both sides were not ignored, the main conclusion reached was that there is room for further improvement of the relationship and more collaboration. The dialogue started in Beijing among European and Chinese scholars is expected to continue.