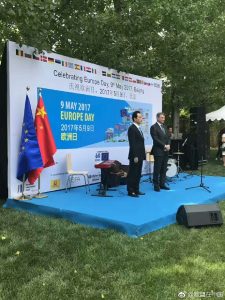 To celebrate the 9 May European Day, the EU Delegation to China held a press conference and a garden party in Beijing on Tuesday 9 May 2017. The press conference was attended by around 30 journalists (Chinese and Foreign Media), where H.E. Ambassador Dietmar Schweisgut discussed the expectations on the EU-China Summit and answered questions on OBOR, the possible use of national security provisions to block investment in certain industries, and attitudes to globalisation. This occasion was also used to announce the launch of the social media campaign #ExperienceEurope.

The reception was held in the garden, with a live band, food and drinks. Additionally, each Member State had a stand where they presented their own traditional foods and beverages.