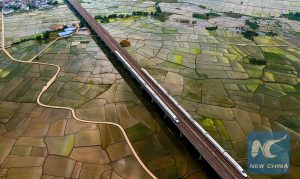 The 19th National Congress of the Communist Party of China (CPC) will set another milestone in the long and historic road of China’s outstanding transformation, Greek Foreign Minister Nikos Kotzias has said.

“A quick glimpse at the last five years reveals the remarkable progress, both domestically and internationally, that China has achieved under the successful leadership of President Xi Jinping,” he said in a written statement to Xinhua.

“Therefore, I see the 19th National Congress as another milestone in the long and historic road of the outstanding transformation of China,” he told Xinhua ahead of the key meeting, which opens Wednesday in Beijing.

The CPC has led China since its first national congress in Shanghai in 1921 and has now paved a new path — socialism with Chinese characteristics — for the development and prosperity of a modern China that is open to the world, he said.

“I rest assured that regardless of the specific outcome of the 19th National Congress, the Chinese people will continue to follow the prudent path of gradual modernization of the New China, a major and indispensable actor for global prosperity and stability,” he said.

“In other words, using the Chinese popular saying and wisdom, I expect the Chinese leadership to keep ‘crossing the river by touching the stones,'” the minister said.

“I, personally, and the Greek people will follow with genuine interest this prominent event, while looking forward to further enhancing our excellent bilateral relations with China, our friend and strategic partner,” he said.

Kotzias said Greece and China, as cradles of the Western and Eastern civilizations respectively, share a special relationship that has lasted thousands of years and is based on mutual respect and understanding.

“This unique relationship has been the foundation upon which we initiated, together, the Ancient Civilizations Forum,” he said, noting that the forum “is now gaining further momentum … as an important forum for bolstering dialogue and cooperation on cultural issues.”

The Greek official also said his country staunchly supports the unity of China, fully respecting the one China policy and Beijing’s stance on Taiwan, as well as the “one country, two systems” practice.

“As the 19th National Congress of the Communist Party of China … is about to kick off, I think that the whole world will follow with close interest its rulings and deliberations,” he said. “I wish the participants and the Chinese people every success.”