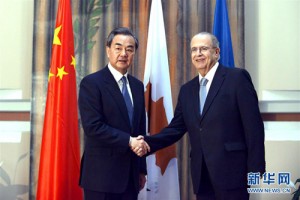 On 21 December 2015 Foreign Minister of China Wang Yi held talks in Nicosia with his counterpart of Cyprus Ioannis Kasoulides. Wang Yi said that China and Cyprus have established firm political mutual trust and profound friendship. The Chinese side views the Cypriot side as a good friend and partner who is trustworthy within the EU. The most prominent feature of the China-Cyprus relations is the mutual understanding and mutual support in the core interest and major concerns of each other. Both sides also maintain communication and coordination in major international and regional affairs. The Chinese side is grateful for the convenience and assistance offered by the Cypriot side to Chinese naval vessels participating in escorting the shipping of Syrian chemical weapons.

Wang Yi noted that the Chinese side appreciates the Cypriot side for its consistent stance on the One-China policy, and will continue to support efforts of Cyprus in safeguarding national sovereignty and territorial integrity. It is hoped the Greek Cypriots and the Turkish Cypriots can reach an early agreement so that the Cypriot issue can get a just and reasonable settlement on the basis of relevant UN resolutions, in which the Chinese side will continue to play a constructive role. It is believed that with the settlement of the Cypriot issue, the potential and space in China-Cyprus cooperation can be fully released, further promoting the development of Cyprus as well as the mutually beneficial cooperation in various areas between China and Cyprus. China supports Cyprus in participating in the building of the ‘Belt and Road’, and stands ready to, together with the Cypriot side, actively explore mutually beneficial cooperation in maritime transport, port, infrastructure, oil and gas development, tourism, agriculture and other areas. China will keep encouraging competent Chinese enterprises to make investment and cooperation in Cyprus.

Ioannis Kasoulides said that the Cypriot side highly values the Cyprus-China relations and has a deep understanding of the importance of bilateral political relations. Cyprus supports the One-China policy and opposes any act of separatism. He agrees with Wang Yi that Cyprus-China cooperation, especially in economy and trade area, enjoys huge potential and space. Cyprus is willing to give full play to its advantages in geography and location to actively support and participate in jointly building the ‘Belt and Road’ initiative put forward by China , actively discuss cooperation in maritime transport, ports, infrastructure, oil and gas development, tourism, agriculture and other areas with China, and enhance exchanges and cooperation in education and people-to-people and culture areas. He welcomes more Chinese enterprises and nationals to make investment and travel in Cyprus.

Regarding China-EU relations, Wang Yi noted that this year witnesses the major development of China-EU relations. The relations between China and the three major countries of the UK, France as well as Germany as well as all sub-regions are showing a healthy interaction pattern of racing for development and promoting each other. This progress in international relations is not only of the most positive significance, but also accords with the common interests of China and Europe. It is hoped that the Cypriot side can keep playing its constructive role in promoting the development of China-EU relations. Ioannis Kasoulides expressed that the Cypriot side is glad to become a trustworthy and good friend of China in the EU, and will continue to spare no efforts in playing a positive role in promoting EU-China relations.