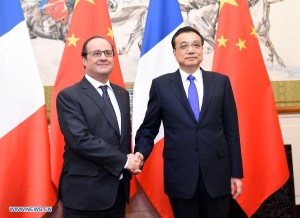 Following the visit of German Chancellor Angela Merkel and Dutch King Willem-Alexander in China, French President François Hollande also visited the country and had meetings with Chinese President Xi Jinping and Prime Minister Li Keqiang. This comes ahead of the UN climate conference to be held in Paris in a few weeks time. In particular, Hollande has won a lot of support from China with China’s acceptance of a five-year monitoring review process to assess the compliance progress in implementing commitments from national governments. It is also important to mention that France and China will possibly co-operate on two British nuclear projects, one at Sizewell in Suffolk and the other at Bradwell in Essex.