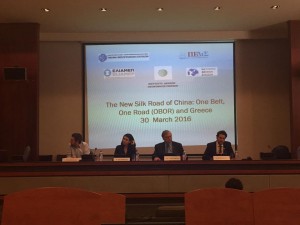 A lively debate on China, the One Belt – One Road and Greece took place on Wednesday 30 March 2016 in a full amphitheater at the Hellenic Ministry of Foreign Affairs. The conference was organised by various Greek think tanks and universities, namely The Hellenic Foundation for European and Foreign Policy , the Institute of International Economic Relations, the Institute of International Relations, the Department of Political Sciences and International Relations of the University of Peloponnese and the Department of Mediterranean Studies of the University of the Aegean. The conference aimed at increasing knowledge on China’s affairs in Greece attracting a large audience composed of diplomats, businessmen, scholars and students.

Ambassador of China Zou Xiaoli was the keynote speaker stressing the importance of the recent deal achieved between the Greek Privatisations Fund and COSCO. In his view, ‘the COSCO Piraeus project has best showcased the five pillars of the Belt and Road Initiative, namely policy coordination, facilities connectivity, unimpeded trade, financial integration, and people-to-people bonds.’. Subsequently, Ambassador Zou reiterated Beijing’s position that ‘the COSCO Piraeus project will serve as a dragon head’ in the Sino-Greek relationship. He also referred to to the role of the China Development Bank which has ‘expressed its willingness to strengthen cooperation with Greece’.  Following this speech, President of International Chamber of Commerce-Hellas (ICC) Nicolas Vernicos shared his view on the role of the Silk Road Chamber of International Commerce and Sino-Greek co-operation in the shipping industry.

Scholars who participated in the conference discussed issues such as China’s governance, relations of China with its neighbours and the One Belt – One Road concept. Dr George Tzogopoulos was among the speakers. In his presentation, he placed the improvement of Sino-Greek relations in the EU-China partnership context and said that the logic of a win-win co-operation is a plausible one. According to Tzogopoulos it is still to early to assess the impact of the privatisation of the Piraeus Port Authority as profits will highly depend on the nature of future investments around the port. However, Greece has now the potential to benefit in areas such as tourism and trade and further boost its exports towards China.