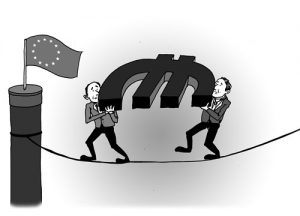 China has shown a steady interest in the integrity of the eurozone since the outbreak of the Greek and the European debt crisis in October 2009.   In particular, Beijing has supported Greece’s stay in the euro and has expressed its concern about the risk of a potential Grexit. This became straighforward mainly in the first six months of 2015.

Within this context, Chinese media are closely monitoring developments in Greece. In recent weeks, the delay in the conclusion of the second review of the third Greek bailout have generated a new debate on whether an agreement will be reached between the Greek government and its creditors. Global Times newspaper published two articles offering different perspectives on Greece’s economic future. The first is written by Liang Haiming, chief economist of China Silk Road iValley Research Institute, a Guangzhou-based think tank.  It is titled ‘A Greek crisis could impact China’s market‘ and argues that a new Greek crisis is a highly possible scenario. The second article is authored by George Tzogopoulos, founder of chinaandgreece.com. It is titled ‘The eurozone remains united for political reasons‘ and asserts that from the moment Greece’s creditors tolerate the ‘Greek rythm’ in implementing bailout terms there is no risk for a Grexit and for the sustainability of foreign investments, including Chinese ones.