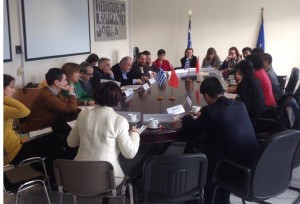 China and Greece are highly interested in promoting their bilateral co-operation at the education and research level. Both sides do frequently organise relevant meetings to discuss new opportunities. In that regard, an important meeting took place on 18 December 2015 in Athens on the occasion of vice-Mayor’s of Shanghai, WENG Tiehui, official visit in Greece. Ms Weng, who is in charge – among others – of education, culture, broadcast, TV and film, press and publication, headed a Chinese delegation. This delegation met in the premises of Greek Ministry of Education with Deputy Minister Theodosis Pelegrinis and Alternate Minister and Head of Research & Innovation, Costas Fotakis.

China and Greece agreed to intensify their contacts in order to promote their co-operation – mainly in fields they have good expertise. The exchange of visits between students, researchers and university professors as well as sister-agreements between schools are among the issues on the agenda. Additionally, both sides plan to establish new culture centres and facilitate  the teaching of Chinese language in Greece and of Greek language in China. This said, education programmes of the Greek Studies branch of the Shanghai International Study University and the Confucius Institute in Athens will be supported.