Greece and China in International Maritime Organisation category A’

The 29th Assembly of International Maritime Organisatoon (IMO) took place from 23 November until 2 December 2015 in its headquarters in London. All 171 Member States and three Associate Members attended the Assembly and elected various countries to be members of its Council for the 2016-2017 biennium. Greece and China were elected in category A’ as countries with the largest interest in providing international shipping services. The other states elected in the same category were Italy, Japan, Norway, Panama, Republic of Korea, Russian Federation, United Kingdom and United States. Τen other countries were elected in Category B’ concerning the largest interest in international seaborne trade. They included: Argentina, Bangladesh, Brazil, Canada, France, Germany, India, Netherlands, Spain, Sweden. 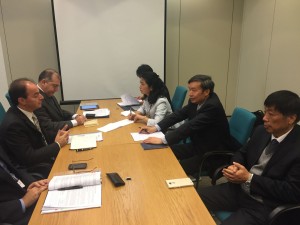 On the occasion of the 29th Assembly of IMO Greek Secretary General of the Ministry of Shipping Mr Ioannis Theotokas had a meeting with China’s Vice-Minister of Transport Mr  Jianzhong He. Both sides outlines their will to expand their co-operation in maritime and marine affairs.