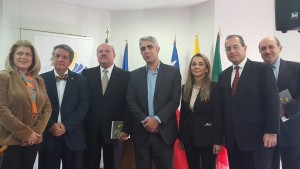 Greece has  officially acquired an observer state status in the Pacific Alliance. The Pacific Alliance is a novel mechanism for in-depth integration, established by the Declaration of Lima, signed by the Presidents of Peru, Chile, Colombia and Mexico on 28 April  2011. Its purpose is strengthening economic cooperation between its members, economic integration with the rest of the world (with a special emphasis on the dynamics that the Asia Pacific region represents), creating jobs and new business opportunities, improving its production standards and the fostering of technological innovation processes, all on the basis of its four pillars:  free circulation of goods, services, capitals and people, as well as cooperation.

The Pacific Alliance is an inclusive initiative with an innovative mechanism of interaction based on a network of 42 worldwide observers, including countries like United States, Canada, China and 15 EU countries, among others. Furthermore, it is worth to mention that in Turkey and Morocco -both of them observers- there are joint commercial offices of the 4 countries of the Alliance.With a market of around 214 million people and with an average GDP per capita of 16,500 dollars (in terms of purchasing power parity), the Pacific Alliance is a suitable platform to encourage joint ventures. It provides opportunities for foreign investments and it is open to entrepreneurship and innovation in various areas. 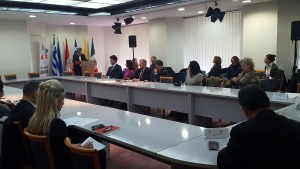 The official participation of Greece in the Pacific Alliance was announced during a ceremony, which took place in the premises of the Hellenic Ministry of Foreign Affairs on 17 December 2015, with the participation of the General Secretary of International Economic Relations, Mr George Tsipras, the Ambassador of Chile, Mrs Pia Busta; the Ambassador of Mexico, Mr Tarcisio Navarrete; the Ambassador of Peru, Mr Jorge Roman and the Honorary Consul of Colombia, Mr. Michael Skoufalos. The participation of Greece as an observer country of the Pacific Alliance narrows the bonds not only with Latin America, but with the whole Asian Pacific region. Greece will be able to approach this emerging area and foster economic and commercial cooperation through projects and programs in various fields with a focus on tourism, culture, education, trade, entrepreneurship, innovation, infrastructure, science and technology as well as exchange of know-how in a wide range of sectors, granting an adequate and effective access to global markets, particularly in the Asia-Pacific region.

Observer status is granted to states that share the principles and objectives stipulated by the Framework Agreement. In order to develop vibrant and productive ties with its observers, the Pacific Alliance has set up individual cooperation mechanisms in areas of common interest that take into account the priorities of the Alliance. Therefore, the next step is the definition of a matrix of areas of interest between Greece and each of the countries of the Pacific Alliance.

You can read here the speech of Mr George Tsipras.

You can read here the speech of the Ambassador of Chile, Mrs Pia Busta

You can read here the speech of the Ambassador of Peru, Mr Jorge Roman

You can read here the speech of the Ambassador of Mexico, Mr Tarcisio Navarrete