Greece and China to boost their tourism co-operation 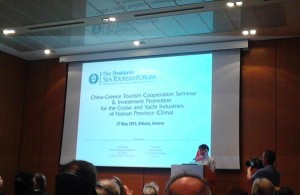 The ‘China-Greece Tourism Cooperation Seminar’ organised by the Embassy of China, the Greek Ministry of Economy, Infrastructure, Shipping and Tourism, Hainan provincional government and the Greek Tourism Confederation took place in Athens, on Wednesday 27 May 2015 on the occasion of the Posidonia Sea Tourism Forum. Ambassador of China Zou Xiaoli referred to the importance of the ‘Sino-Greek Maritime Co-operation Year’ and argued that both countries will benefit by boosting their co-operation. Recent developments such as the improvement of the visa policy , the operation of direct flights and the appropriate training of tourism agencies constitute steps towards the right direction. Ambassador Zou concentrated on the potential of the Chinese market and the quality of Greek services and mentioned three main pillars for future collaboration in the area of tourism. These are the arrival of Chinese pupils, just married couples and older people to Greece. Last but not least, he praised Greece by saying: ‘No one can understand Europe without understanding the Greek civilisation and no one can understand the humanity without understanding Greece’.

For her part, Greek Alternate Minister of Tourism Elena Kountoura agreed with Ambassador Zou’s approach, focused on Greece’s main advantages and said that the Greek government is working hard to closely co-operate with China. As she explained, ‘tourism can bring China and Greece closer’. Ms Kountoura also gave emphasis on the expansion of the direct flight connection programme which will soon include flights not only from Shanghai but also from Beijing to Athens. She also announced that Greece will soon be present in an international tourism exhibition to be organised in China.A strategic co-operation agreement in the area of tourism co-operation between Greece and China was signed after the speeches of Ambassador Zou and Alternate Minister Kountoura.

You can find here more information on the seminar.