Sino-Greek partnership at the local and regional level 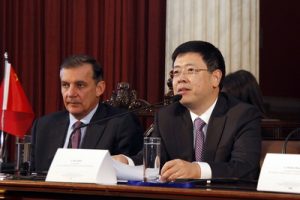 Greece and China aim to further promote blilateral ties through a Chinese- Greek Cities Forum which was launched in Athens on 11 November 2016.  In particular, the first session of the new platform will take place in Zappeion Exhibition hall bringing together a delegation of at least 70 representatives from four Chinese provinces and 14 cities with more than 160 Greek mayors, regional governors and other officials. During the one-day event, which is a major one for local exchanges since the establishment of diplomatic relations between Greece and China 44 years ago the two sides will explore the potential of enhancing bilateral cooperation in many sectors via the local level. The forum’s theme will be the prospects of Sino-Greek collaboration on local governments level in the framework of the Belt and Road initiative. It  is co-organised by the Amphictyony of Ancient Greek Cities and the Chinese People’s Association for Friendship with Foreign Countries under the auspices of the Greek Ministry of Interior and the Chinese Embassy in Greece.

The new initiative was presented to journalists during a press conference organised at University of Athens on 2 November. Ambassador of China to Greece, Zou Xiaoli, Rector of the Athens National Kapodistrian University, Athanassios Dimopoulos,  Mayor of Marathon, Ilias Psinakis, and Interior Minister Panagiotis Kouroumblis were the speakers. Among others, Ambassador Zou said: ‘The Belt and Road initiative provides a golden opportunity for China and Greece, two great ancient nations, to join hands in promoting the progress of human civilizations, while achieving common development and prosperity of ourselves. This is the essence of China-Greece comprehensive strategic partnership’.

This article is also based on article written by Maria Spiliopoulou on the website of Xinhua News Agency.