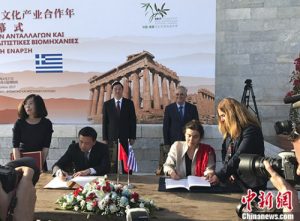 On Thursday 27 April 2017 China and Greece  officially inaugurated the China-Greece Cultural Exchanges and Cultural Industry Cooperation Year in Athens, in an effort to enhance bilateral relations. ‘Today with the official opening of the year of cultural cooperation, the two ancient civilizations are meeting in the present. The past is a seed for the future and cultural heritage a source of inspiration,’ Greek Culture Minister Lydia Koniordou said in her speech.

Koniordou warmly welcomed the opening of two exhibitions of Chinese art. One is dedicated to the rich cultural heritage of the city of Hangzhou in Zhejiang Province and will run for three weeks, while the other which closes on Sunday features the 2022 Winter Olympic Games to be held in Beijing and Zhangjiakou, and the links between China and Greece, the birthplace of the Olympics.

Greek and Chinese officials underlined the willingness of both sides to further strengthen their cultural ties, as the two countries have begun to deepen their strategic partnership in all sectors. During the opening, two memoranda of understanding were signed on film co-production and translation and the publishing of classic and modern Greek and Chinese literary works. Chinese Ambassador to Greece Zou Xiaoli told Xinhua that cultural exchanges are an integral part of Sino-Greek relations and play an important role in strengthening the relationship between China and Europe, as well as promoting dialogues between civilizations and mutual learning so as to advance world peace and development.

‘The 2008 Olympic Games were a great example of our cooperation. In 2022, the 24th Winter Olympic Games will take place in Beijing. We believe that the Olympic ideals which originate from ancient Greece will shine brightly once again in Beijing,’ said Zhang Fuhai, director of China Foreign Language Publishing Administration. Thursday’s celebration included a traditional Chinese tea ceremony, a performance by Chinese music artists and a concert by artists of the Athens State Orchestra and soloists of the Greek National Opera. The inauguration was attended by Greek Deputy Prime Minister Yiannis Dragasakis and representatives from the field of culture and media of both countries.