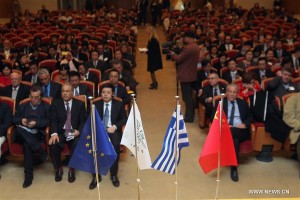 Officials and representatives of universities from Greece and China  signed a series of bilateral cooperation protocols during an event organised in Athens on Tuesday 23 February 2016.  Xinhua news agency describes this event  as ‘the largest held in the Greek capital  since the establishment of diplomatic ties between Greece and China’. In particular, 66 representatives of 30 Chinese universities participated in a symposium on higher education and research cooperation between the two countries at the premises of the Athens Technological Educational Institute (TEI).

Athens TEI President Michalis Bratakos expressed hope that the agreements will become the pillars of a strong future cooperation between the academic communities of Greece and China.Under the agreements, Greek and Chinese universities will focus on people-to-people exchanges and joint research and development programs. ‘The message we wish to convey to our Chinese colleagues is let’s have exchanges of teachers and students and create joint educational programs, such as distance learning courses. Let’s deepen cooperation in post graduate studies and in research which will generate revenues for the universities,’ Bratakos said.

The new signed agreements will help promote cooperation in a more systematic manner to the benefit of Greece, China and the world.