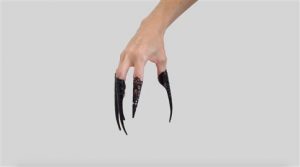 Marianna Ignataki (b.1977) lives and works in Beijing and Thessaloniki. Her sixth solo show entitled “Josie, the Armor and the Hairman” deals with the idea of body modification and the use of the body as a ‘dens’ (‘a hiding place’) through a series of works -of evident Chinese influence- that include sculptures, watercolor and pencil drawings and a video.

In the field of social theory the human body is forming and reforming the structure of society, and meanwhile it is also shaped by the changing society itself. Some studies suggest that the body should serve as an organizing principle for sociology. Brian Turner has coined the term “somatic society” to describe how the body in modern social systems has become “the principal field of political and cultural activity”. To both Bourdieu and Elias, the body is an unfinished entity developing in conjunction with various social forces and integral to the maintenance of social inequalities. Both recognize that there is an interrelationship between the development of the body and people’s social location and both view the management of the body as central to the acquisition of status and distinction.

In the work of Ignataki we see how parts and extensions of the human body (such as fingernails, feet and hair) are perceived in Chinese myths, legends and traditions and how they serve as signifiers and symbols forming a kind of human ‘armor’. Historically the Chinese had (and still have) a peculiar notion of beauty that reveals the special relationship they have with their bodies. Hair according to Confucius do not belong to man but to his ancestors, cutting them would be both a terrible blasphemy and a self mutilation of one’s body. Moreover, from ancient till recent Chinese history both length and style of the hair is associated with social status, ethnicity, even political beliefs. During the Qing Dynasty which starts in the 17th century the Manchu hairstyle (hair on the front of the head shaved off above the temples every ten days and the remainder braided into a long braid) was imposed as the main hairstyle for all men indicating their loyalty to the Qing rule. Manchu hairstyle was compulsory for all and the penalty for non-compliance was execution for treason by decapitation. As early as the spread of Confucianism both men and women wore their hair long and weaved them wrapped into a bun (topknot) or other elaborate hairstyles.

Similarly, very small feet (lotus feet) for women and very long fingernails for both men and women were trends followed by a large part of the Chinese society principally because of their associations with class. A large part of the female population had resorted to the brutal tactic of foot binding, a process that literally disabled them and made them completely dependent on domestic servants or younger members of their family to care for them. This practice possibly originated in the 10th or 11th century among upper-class court dancers during the Five Dynasties and Ten Kingdoms period in Imperial China and then became popular during the Song dynasty until it eventually spread to all social classes. Foot binding became the most popular means of displaying social status (women from wealthy families did not need their legs to work and could afford to have them tied) and was later adopted as the main symbol of beauty and elegance in Chinese society. By the 19th century, it was estimated that 40-50% of Chinese women had bound feet in the form of lotus and among upper class Han Chinese women the figure reached almost 100%. Bound feet was a prerequisite for finding a good husband and in some areas it also became an avenue for poorer women to marry into money and climb the social ladder. In the late 19th century, especially among the lower classes it was customary to bind the feet of the eldest daughter of the family, who was intended to be brought up as a lady. Her younger sisters would grow up to be bond-servants or domestic slaves and be able to work at home and in the fields, but the eldest would assume to never have the need to work.

Likewise, growing long some of the fingernails and thus partially disabling one’s hands, meant and still means in some parts of China that the person belongs to a specific class hence he or she does not have the need to do any manual labor. This voluntary canceling of the hands -a sort of self mutilation of the body- for social privileges resulted protecting people from society and at the same time trapping them into themselves. The study of Chinese ideograms is quite interesting. Words like 甲 (jiǎ) which means armor, is a derivative of the words 指甲 (zhijia) which means claws and 里 (lǐ) which means inside. Hands with long fingernails, hair, hairmen, spirits and veils describe the ‘extended body as a dens’ and constitute the mystery world of the artist whose pictures look like they came out of a dark fairy tale. The silhouette of the hand with fingernails forming a cocoon, the dancing fingers that shape an inverted lotus and hair braids that wrap around the body to become nests are regular patterns that have replaced motifs like the mask, the beak and the transformations encountered in Ignataki’s earlier work.