Greek and Chinese officials and scholars talk about OBOR 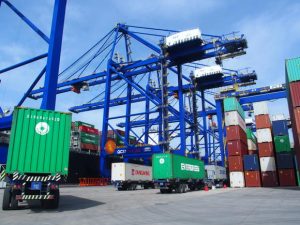 The conference offered a platform to state officials, entrepreneurs and academics to express their views on the prospects of expanding and deepening bilateral collaboration in the sea, tourism, new technologies, renewable energy and other sectors.  The success story of COSCO SHIPPING’s investment at Piraeus, Greece’s largest port, since 2010 was highlighted by most attendees as a great example of fruitful, mutually-beneficial cooperation. Within a few years, the number of containers passing through its subsidiary Piraeus Container Terminal (PCT) has quadrupled, the piers are upgraded, and the terminal’s link to the railway network has made many multinationals choose Piraeus as a key transport hub for their products.

“COSCO SHIPPING at Piraeus has upgraded and modernized the port, has given a new breath of life to Piraeus, and of course has also helped significantly in the cruise industry sector,” George Tziallas, General Secretary of Greece’s Tourism Ministry, said at the conference. “The investment is progressing very well. It is progressing well both for China and Greece, because it provides added value and dynamism in the economy and our country’s geopolitical position,” main opposition New Democracy party MP Yorgos Koumoutsakos told Xinhua.

Koumoutsakos said Greece is emerging as an international trade hub, and he is very happy that Greece foresaw this a decade ago by entering into a strategic partnership with China.  “We are following with great pleasure the progress in COSCO SHIPPING’s investment at Piraeus which benefits both peoples, creating job positions and growth. Today Piraeus port is the gateway of Chinese trade into Europe and we hope that in the future we will witness further growth,” Emmanuel Giakoumakis, rector of the Athens University of Economics and Business, told Xinhua.

“The Belt and Road Initiative is a very promising policy for the promotion of international collaborations based on mutual respect and mutual benefit. Our country participates in this policy and our university supports entrepreneurism in this context,” added the rector. “The Belt and Road Initiative is very important for peaceful development, for trade in Asia, Europe and Africa. When President Xi Jinping talked about this in 2013, we couldn’t expect so many tangible and practical results. We are experiencing them now,” said Dr George Tzogopoulos, founder of chinaandgreece.com.

On behalf of the Chinese side, Gao Wenqi, Charge d’ affaires from the Chinese Embassy in Greece, reiterated China’s optimism that Sino-Greek friendship and cooperation will further flourish under the Belt and Road Initiative. “I am sure our confidence will prove well founded,” Gao said.