The Greek crisis from the perspective of CCTV correspondent in Athens 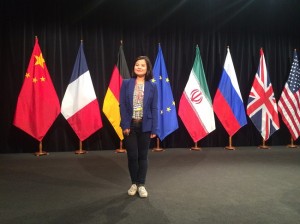 The outbreak of the Greek crisis in 2009 and its prolongation until nowadays have naturally attracted the attention of international media. A huge demand on news reporting about the country has been observed in the last years. Many journalists come to the country in order to closely monitor developmentσ about the crisis and how the crisis affects citizens in their daily life. Chinese media could not be an exception. In this context, journalist Ming Gong travelled from her place of origin-Chongqing – a major city in Southwest China – to Athens, which has been her base almost the last four years.

Ming works for CCTV as a correspondent based in Athens. She was sent to Greece at the end of 2011 to establish a CCTV Athens Bureau and became the Chief correspondent during that time. During the past three and a half years, her reports mainly focus on economic and political issues of the country and social issues referring personal stories of Greek people. Ming’s reports began with several strikes and protests nearly every day in 2012 which left her almost no time to have a break. She says on chinaandgreece.com: ‘I came in a very difficult moment of the crisis that has heavily hit this country.  With this totally upside down image comparing to the common impression of a blue and white holiday heaven of Greece in most people’s imagination, I have seen this country going through these painful changes in recent years’.

Ming believes that ‘Greece is a place which a visitor needs time to explore in detail after experiencing a first shock caused by demonstrations and strikes. She also considers the country ‘a conservative one in slow pace of modernisation with many people generally repelling changes’.  At the same time, she finds Greek people more genuine and friendly in comparison to other countries and things that they are not seriously influenced by commercial interests. 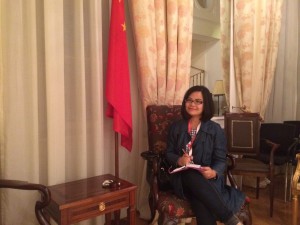 The CCTV correspondent in Greece explains on chinaandgreece.com that every crisis has two sides and therefore young people should try and catch new opportunities. According to her interpretation of the situation, the crisis has been a big blow to the Greek society indeed making people suffer and seriously hitting the middle class. But as Ming says, ‘in a way the crisis compels this country to change and rebuild its collapsed system of democracy’. In her view, ‘it can lead people to think, create and change’. In particular, she refers to young Greeks who now tend to create start-ups instead of working in the public sector as well as the importance of the introduction of e-governance and of privatizations which facilitate Greece’s adjustment to the current globalization trend

Sino-Greek relations are certainly a major priority in Ming’s work. ‘For China, Greece has a very important geo-strategic interest and both countries can politically and economically benefit by expanding their co-operation’, she argues. China’s ‘One Belt One Road’ policy can further foster this co-operation, principally regarding the maritime sector. COSCO’s project is the core of this policy. Even though the future investment of COSCO has been delayed due to the ongoing political instability, the Greek Government is generally advocating for its continuation. Bilateral ties also built up on tourism and cultural connection. As the number of Chinese tourists has sharply increased in recent years, Greece has a great potential in tourism resources which need to be reflected on developing Chinese markets. The organisation of the first Chinese film festival last years in Athens and  the recent call for strengthening exchange and cooperation on film industry also outlines the common will to strengthen soft-power ties’ Ming asserts.

What Ming has found particularly difficult in covering the Greek crisis was the language. It has been hard for her to report without original information which is published originally in Greek. ‘Although I have people around who can help me, it’s still difficult for me to do research’, she admits. Regarding her future plans she may either stay in Greece for one or two years longer depending on CCTV’s demands. But her dream is to go to the Middle East and cover local developments. From 28 June to 14 July 2014 Ming covered the Iran nuclear talks that took place in Vienna.