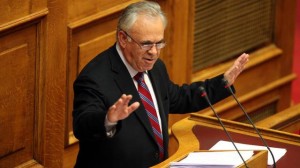 The privatization of the Piraeus Port Authority (PPA), which Chinese shipping conglomerate COSCO Group is among the forerunners to bid for, will be completed within weeks, visiting Greek Deputy Prime Minister Yannis Dragasakis told Xinhua Friday. ‘COSCO is an active participant (in the bid) and it can make a very competitive offer,’ said Dragasakis.The process has been ‘slightly delayed’ as a result of ‘a change in the public entity owning the port’s shares due to a reshuffle of the Greek government,’ he said. The new stand is a U-turn to the initial remarks made by some ministers to halt the planned sale of a 67 percent stake in the Piraeus Port Authority, which runs Pier I of Piraeus port, Greece’s biggest port which lies in the east Mediterranean.The Chinese-run Piraeus Container Terminal (PCT) in the Piraeus Port, a paradigm of mutually beneficial cooperation between China and Greece, is “of major concern” to Greece because it is crucial to the development of the port, Dragasakis said.

COSCO has been running Pier II and Pier III of the port through its subsidiary Piraeus Container Terminal (PCT) since 2008 and the commercial traffic through the port has increased eight-fold since the takeover. Dragasakis, with a wide agenda during his visit to China, mentioned Greece has also rolled out a three-year program of action that covers all major cooperation projects with China, noting Thriasio, an area close to Piraeus port which can be potentially developed into a logistics center and a technology and science park. In addition, Dragasakis encouraged more Chinese companies to participate in the construction of railway networks across Greece and a new airport in the southern island of Crete, stressing those projects are important for Greece to revive and develop its national economy.

The two countries should take pride in their cultural heritage as ‘the Chinese culture has significantly influenced the cultural evolution of Asia for centuries while the Greek culture has been the cradle of Western civilization,’ the deputy prime minister expounded, adding that Greece could play the role of a ‘cultural bridge’ between China and the West. Dragasakis also dismissed concern that the new Greek government is considering an exit from the Eurozone. “Greece is an organic member of the Eurozone,” he said, ‘There is no intention, or plan, or thought from our side to leave the Eurozone.’