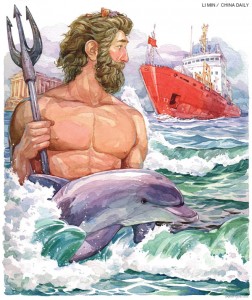 Maria Petrakis from Athens and Lyu Chang from Beijing wrote an article in China Daily newspaper entitled: ‘Passage to Piraeus’ in which they analyse the recent deal agreed between the Greek Privatisation Fund and COSCO for the sale of the Piraeus Port Authority. In their article they use comments of Greek scholars who discuss this deal.  Research fellow at the Center for China-EU Relations at Tsinghua University, Vassilis Trigkas, says that ‘Greece eventually could become one of the major hubs of the Belt and Road Initiative, and if investments in logistics and infrastructure are complemented by a stable macroeconomic environment and regulatory predictability, it can attract many more investments in other sectors as well’.  For his part. Lecturer at the University of Peloponnese, Sotiris Petropoulos, argues that ‘Piraeus will continue to play a major role as a transit hub between China and Europe – and Greece as a door to Europe’.

Journalists Maria Petrakis and Lyu Chang conclude in their article that ‘the Piraeus deal is being seen as a catalyst in the so far lackluster sale of Greek state assets, as demanded by its creditors’.

You can read here the China Daily article.