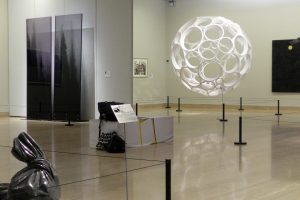 As part of the 2017 Greece-China Year of Cultural Exchanges and Cooperation of Cultural Industries, Greece is participating in the 7th Beijing Biennial of Contemporary Art as the honoured country. On the occasion, the Press and Communication Office of the Greek Embassy in Beijing and the Central Academy of Fine Arts of China organized, on 20 September, on the latter’s premises, a lecture by artist Richard Whitlock, on the importance of non-prospectival approach in Byzantine iconography and Chinese art, as well as its modern approaches in photography and video art. Whitlock lives permanently and creates  in Greece and his work titled “Light / Buoyant Puzzle Sphere” is being exhibited at the Beijing Biennale, where he has attracted many viewers, especially of young age.

In a room of the Academy of Fine Arts packed with more than 100 students and teachers, Mr Whitlock referred to the relevance of the aforementioned approaches to the conscious “abandonment” of a linear perspective approach in Chinese artists such as Shen Kuo, Shi Tao, as well as in Byzantine iconographers. As he said, the absence of a linear perspective frees the artist, but primarily the spectator, from engaging with a particular work of art from one point of view or focus, and allows for a multilevel, multifaceted reading, leaving the work of art itself to speak directly with the viewer. In Chinese art, the non-prospectival approach better reflects Nature and the physical space, while in Byzantine art it facilitates the unmediated contact between the viewer and the artist with god.

The artist was introduced to the audience by Professor LI Jun, Deputy Dean of the Art Theory Department, while the event was attended by the deputy chairman of the Thessaloniki State Museum of Contemporary Art, which organized the Greek exhibition at the Biennail, Aristotle University of Thessaloniki Professor of Communication, Dr Sofia Kaitatzi.

In his concluding remarks, the Director of the Press and Communication Office of the Greek Embassy in Beijing, Mr Efthimios Athanasiadis, referred to the importance of cultural exchanges, especially in the field of visual arts, within the framework of the current Greece-China Year of Cultural Exchanges. In addition, he underlined the significance of prompting young Chinese artists and students to get acqainted with Greek space and the benefits that can be gained from educational exchanges and familiarization trips in Greece, as well as the importance of educational tourism and related visits by Chinese visual artists, audiovisual producers and filmmakers.