A new era starts for the Greek-Chinese Economic Council 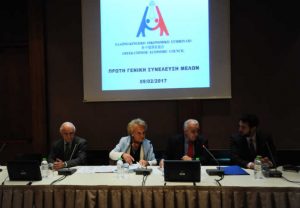 On 9 February 2017 the 1st General Assembly of the Greek-Chinese Economic Council  gathered to electe its new 25-member Board of Directors and the 5-member Financial Audit Commission. George Tzogopoulos, founder of chinaandgreece.com was elected in the Board of Directors.

During the General Assembly, attended by Deputy Minister for the Economy and Development, Stergios Pitsiorlas, the Chairman of the Board Fotis Provatas presented GCECs’ Action Report, stressing that ” in 2011 we started as a small group of individuals from civil society in the framework of the City of Athens Municipal Council. After six years of systematic work, we have become the current 99-member Greek-Chinese Economic Council and with our first General Assembly we are moving dynamically ahead.” Mr. Provatas referred to the close cooperation of the GCEC with the competent government authorities, including the Deputy Prime Minister, the Ministers of Foreign Affairs, State, Transport, Communications and of course with the Deputy Minister of Economy and Development. He also referred to the development of a wide Network of Partnerships in China, with central and local governments – including Beijing, Shenzhen, Shanghai, Chongqing, Guangzhou, Qingdao – and with major Chinese business enterprises. “Already the Greek-Chinese Economic Council is represented by its President in various International Organizations based in China, while eleven of its members took part in the Prime Minister’s mission to China,” said Mr. Provatas.

In his speech, Deputy Minister of Economy and Developmentm Stergios Pitsiorlas, stressed that the Government is interested in even closer cooperation with China, which should advance with careful steps in the light of new international developments. He added that a Joint Committee of the two governments has already been set up to shape a Common Enterprise Policy, with the next meeting to take place in April. In addition, a Special Conference will take place in China in May. Finally he referred to the close co-operation with the Greek-Chinese Economic Council, emphasising that this will become even closer in the coming period.

The General Assembly was attended by influential Greek businessmen, by prominent members of the Greek business community established in China and by members of international economic organizations, who spoke about their experiences, the difficulties they have encountered, and the huge prospects which are opening up in the Chinese market for Greek entrepreneurship, which call for extroversion and methodical preparation.

The following members were elected:

Members of the Board

Former President of the Central Union of Municipalities of Greece

Project coordinator for the country’s ports in Hellenic Republic Asset Development Fund (HRADF), Member of the Board of Directors of Piraeus Port Authority S.A.

CEO, EUROCHINESE DEVELOPMENT, Former Athens City’s Delegate for the Economic Cooperation with the P.R. of China

President of the European Economic and Social Committee, Secretary General of the Association of Greek Tourism Enterprises (SETE)