The growing interest of China in European football 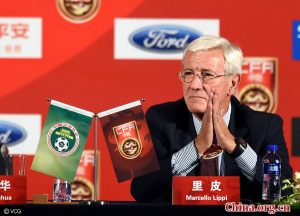 A growing and systematic Chinese interest in football has been observed in recent years, which has become focused on four different aspects. The first is the steady investment of Chinese businessmen in European football, as they have started to become stakeholders in long-famous teams such as Italy’s AC Milan and Inter Milan, and Spain’s Atletico Madrid. The second is the active and straightforward policy to import the European football know-how into China. A recent agreement between England’s Manchester City FC and China Media Capital, for instance, constitutes a platform for using British expertise and resources in the rapidly developing Chinese football industry.

The third is the big spending for the transfer of important football players in the Chinese Super league including the Brazilian star Givanildo Vieira de Sousa, popularly known as Hulk, and the Italian striker Graziano Pelle. The fourth and perhaps most important aspect is the attempt of the Chinese Football Association (CFA) to strengthen the country’s national team. The hiring of famous Italian manager Marcello Lippi is part of this strategy.

The performance of a national team is the mirror of football’s progress in a country. Although the game is very popular in China, the national team has not been particularly successful. It has only participated in one World Cup – in Japan and South Korea in 2002 – without managing to score a single goal and currently occupies 84th position in the FIFA rankings. Lippi becomes the head coach in a difficult period. The effort of China’s national team to qualify to Russia’s 2018 World Cup has been perplexing as, after the first four games, it only managed to acquire one point after a home draw with Iran. Defeats to South Korea, Syria and Uzbekistan do not yet spell elimination, but it’s going to be long struggle from now on. The realistic objective for China is to fight for third position in their group, which will give it the ticket to a play-off round to gain a coveted place in Russia.

Lippi is highly experienced. He knows very well that the home game against Qatar on November 15th will be “do or die.” If China wins, it will be back on track. More importantly, it will gain valuable time for training and better preparation as the next game will take place at home again against South Korea next March 23. And if the Chinese national team wins that match, the qualification scenario – even through the playoff route – will gain ground.

However, Lippi is looking beyond this to a vision of rebuilding the national team and looking towards the future. It is not the first time the CFA has appointed a foreign manager. José Antonio Camacho and Alain Perrin did not manage to respond to the expectations despite their relatively good record from previous spells in Spain and France respectively. The main difference with Lippi, though, is not only his almost permanent success as head coach of Juventus and the Italian national team in the past but also his knowledge of Chinese football. From 2012 until 2015 he delivered three domestic titles and the 2013 Asian Champions League as manager of Guangzhou Evergrande club.

Obviously, the new mission of the Italian coach is more challenging because he will not be able to count on expensive foreign players as it had been the case with Guangzhou Evergrande. However, being a highly-liked and respected figure in China, he is able to motivate current players as well as give them confidence and inspire the future generation. The lack of great talent can be sometimes balanced by hard-work, good methodology, team spirit and passionate training. There is no better example than the modern miracle of world football when the Greek national team managed to win the European championship in Portugal in 2004 under the guidance of German manager Otto Rehhagel. At that time, Greece enjoyed very little reputation as it had only qualified once to a world cup – similar to what is happening with China now.

In June 2016, before agreeing to sign with the CFA, Lippi gave an interview to the Italian influential daily “La Gazzetta dello Sport” saying that “when [the Chinese] are spending, this means they have a project.” Indeed, President Xi Jinping has publicly expressed his hope that China could become a first-class football superpower in the future. The CFA has set specific goals in the short, medium and long term, from 2020 until 2050. It’s all about development and legacy. And Lippi can contribute in a catalytic way.