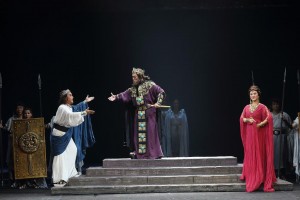 On Wednesday 29 July 2015 the China Pingju Opera Theatre presented Oresteia at Paleo Eleourgio in Eleusis. It was directed by passionate for Greek tragedies theater director and professor, Luo Jinlin, who was Ambassador of Hellenism for 2009. Translation is made by distinguished academic and Hellenist Luo Niansheng.

The Oresteia performance is the result of a co-operation between China Pingju Opera Theatre and Aeschylea Festival. This co-operation empowers Eleusis21 vision for the candidacy of European capital of culture to create a place of dialogue and exchange between the European culture and the Chinese culture.