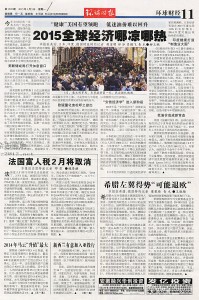 In its edition of 5 January 2015 the Chinese edition of Global Times (Huanqiu Shibao) published an article on political developments in Greece. The article presented the results of polls and discussed the possibility of a ‘Grexit’. As Tzogopoulos said in the newspaper, ‘this possibility is real’. He explained that many analysts and think tanks in Europe and the United States use now the term ‘Grexit’ again after the summer of 2012. He also said that European politicians including Merkel, Juncker and Moskovici want to push Greek citizens to vote for mainstream parties as part of their communication startegy. However, Tzogopoulos warned that the way is very long. First, SY.RIZ.A need to win the election. Second, it should be able to form a coalition government. And third it should cancel Greece’s commitments and financial obligations for a ‘Grexit’ to happen. In his view, no other source of liquidity  exists apart from the current bailout programme.