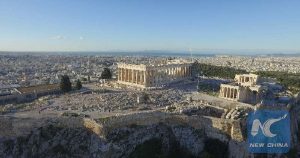 Ascending the Athenian Acropolis, acknowledged by UNESCO as a timeless symbol of the world’s cultural heritage, is considered as a must have experience at least once in life. However, the steep rocky hill in the heart of the Greek capital which embodies Classical Greece’s ideals remains out of reach for many. Xinhua News Agency in collaboration with the Greek Culture Ministry embarked this November on an unprecedented mission to capture Greece’s unique cultural treasures with Virtual Reality (VR) cameras and drones, allowing people across the globe to take a 360-degree look at the Sacred Rock, as well as a panoramic aerial view of the breathtaking monuments built in the 5th century BC.

Xinhua’s team is producing a documentary on Greece’s rich ancient civilization relics filming with the latest technological tools the Acropolis, as well as the underwater antiquities discovered at the seabed of south Peloponnese peninsula. Standing in front of the Parthenon temple on a sunny day, Vassiliki Eleftheriou, director of the Acropolis Restoration Service, which realizes all restoration works on the hill since 2000, spoke to Xinhua about the challenges of the task which is a national priority for Greece despite the current economic difficulties.Eleftheriou warmly welcomed the use of technology in documenting the site with more accuracy and bringing it closer to wider audiences. 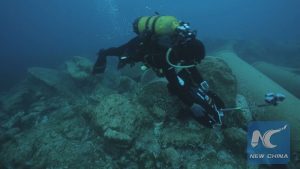 A picture taken on Nov. 12, 2016 shows a underwater photographer filming columns on the seabed near Methoni (Source: Xinhua)

The drones flying around the ruins of Propylaea, Erechtheion and the Athena Nike temple captured from a bird’s eye view the cranes, archaeologists and marble technicians operating on the site, as Theodosis Tzavaras, the operator of the VR camera, wearing a robotic arm filmed details in 360 degrees. “You have everything in your frame,” he explained with enthusiasm, as tourists visiting the Sacred Rock were watching the filming, expressing eagerness to see the result. Angeliki Simosi, head of the Greek Ephorate of Underwater Antiquities, which is responsible for the preservation of ancient relics under sea, also shared their enthusiasm on the new perspectives VR technology and drones offer, while giving a tour to Xinhua’s team of the submerged treasures of Navarino Bay off Pylos town.

Off the coast of Sapienza island, braving the rough seas, Xinhua produced an underwater VR video which will help reveal more details and perhaps solve the mysteries of the two Roman era shipwrecks of the sarcophagi and columns, as well as the modern wreckage of the Greek oil tanker Irene Serenade which sank in the bay in 1980.

In contrast to the monumental complex of the Acropolis of Athens, the greatest and finest example of the beauty and glory of Greek ancient civilization at its peak, the underwater treasures of Navarino traced at a depth of 10-15 meters have still not been fully documented. Xinhua’s production will take audiences for the first time on a virtual reality trip to the site where Greek authorities aim to create underwater archaeological museums and diving parks in the future to promote Greece’s cultural heritage.