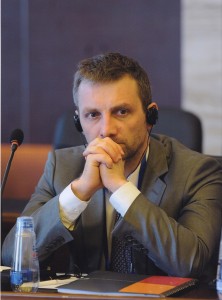 A few days after the official visit of Prime Minister of China Li Keqiang in Russia, chinaandgreece is attempting to elaborate on Sino-Russian relations and their impact on world affairs. In so doing, it has invited Head of the Department of Economics and Politics of China at IMEMO RAN, Dr Sergey Lukonin, to offer his insights. In his interview with chinaandgreece Dr Lukonin assesses the improvement of relations between Beijing and Moscow by paying attention to specific interests of both parts. He discusses economic motivations behind the current solidarity climate and explores whether a military alliance between China and Russia is possible.

What is the importance of the visit of Prime Minister of China Li Keqiang to Russia? Is trade the main priority?

Li Keqiang’s visit demonstrates the strengthening of Russian-Chinese cooperation in conditions of sanctions war. China is using the ‘turn to Russia’ in its own strategic goals. Refusal to support Western sanctions is not associated with political solidarity with Russia but with the protection of the interests of Chinese business. Russia wants to compensate the losses of sanctions by expanding its co-operation with China. China is using the situation to enter to niches (high-tech and financial sectors) which are frozen in the Russian market after sanctions by European and American companies.

The main priorities for China are the modernization of its economy and the increase of Chinese high-tech products exports. China is not yet able to increase exports of high technology products to Western Europe. Europe remains a source of Chinese innovation, not the consumer. Russia has become one of the main markets for Chinese high-tech products. The main instrument for their promotion is the investment in infrastructure. In that regard, preferential loans are given if Chinese technology and equipment are used.

How do you assess future co-operation between Russia and China after the agreement of last May?

If sanctions are not cancelled, China will possibly become a transit point for the transfer of high technology from the EU and the United States to Russia. But these technologies will be transferred to Russia as ‘designed in China’ ones. China is becoming – economically, financially and politically – an increasingly important partner for Russia; more than Russia is to China. Russia will have to take this into account when co-operating with China in Central Asia and Eastern Europe. For example, Russia is already a follower in the economic zone of the Silk Road project.

Can we expect a military alliance between China and Russia?

China will not be prepared to advance its economic, political and military co-operation with Russia to the extent of threatening Sino-American relations. China opposes the idea of ​​a military-political alliance with Russia and does not try to use its position in the SCO and BRICS in order to forge an anti-American stance.