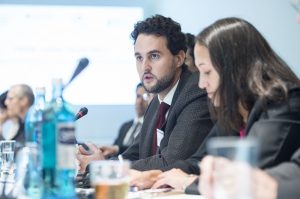 From 9 until 12 October 2017  a delegation of international experts was in Berlin to dicuss China’s international role and ways of engagement with it. The mission was organised by Konrad Adenauer Foundation and included meetings with German diplomats and politicians as well as a roundtable debate which took place in the headquarters of the Foundation in Berlin. George Tzogopoulos was among the foreign policy experts and represented Greece.

The Berlin talks were held at a critical moment for Sino-European relations as Chinese investments are causing some alarm to the West on alleged future consequences. The experts presented different cases studies according to specific countries and offered their own perspective to the lively debate. Views from Cambodia, Germany, Greece, Greece, Pakistan, Poland, Qatar, South Africa, Turkey and the US were heard. Greece is largely attracting the international attention following a recent veto, which blocked the EU effort to issue a statement on China’s human rights record in Geneva. Critics say that China’s interferes with Greek politics. But moderate voices downplay fears and focus on the importance of Chinese investments (in the context of required privatisations) for the Greek economy.