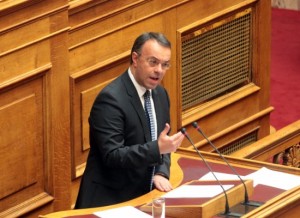 Alternate Finance Minister of Greece Christos Staikouras has undertaken one of the most difficult missions since the national election of June 2012. This mission includes, inter alia, his participation in the ongoing negotiations with the so-called Troika as well as his work to support growth initiatives. A few days after the publication of the official statistics showing that Greece has returned to growth after six years of recession Mr Staikouras talks to chinaandgreece on the new international position of the country. In so going, he elaborates on Sino-Greek relations, the investments of China in Greece and possibilities for further co-operation in the next months.

What are the prospects of Sino-Greek relations for the coming months?

Greece has managed to reposition itself on the global economic map having better perspectives for the future. After a few difficult years, it has stabilised its public finances by creating high primary surpluses and returning to positive growth rates. This is happening because structural changes have been implemented, chronic internal and external imbalances have been solved and the competitiveness of the economy has been strengthened. Within this context, having restored its international position, Greece can look towards the future of its national economy with optimism, self-confidence and dignity.

Sino-Greek relations – which have been significantly improved in recent years – are of utmost importance in that regard. In my opinion, Greece can become a valuable partner of China in our ‘greater neighbourhood’ being a strong linkage of economic and cultural co-operation between the European Union to China.

For its part, China is a primary field of business and commercial interest for Greek domestic production activities by representing a market with huge size and growth rate.  Many steps have been already made towards both directions and I expect more to follow soon.

Is it a simple process for Chinese companies to invest in Greece and for Greek ones to do so in China?

In recent years Greece has developed a friendly environment for investments. This reality is reflected in a number of international surveys and rankings. According to the Doing Business Index of the World Bank, for instance, Greece has taken the 61st position in facilitating business activities in comparison to the 109th of 2010. It has also climbed to the 62nd position in protecting investors in comparison to the 154th of 2010.

Studies such as the one conducted by Greek Centre of Planning and Economic Research suggest that Greece has attracted investments worth of 37.6 billion EUR in the last two years, having already signed four public-private partnership contracts worth of 155 million. The country is also expected to sign nine more contracts worth of 650 million EUR in the first half of 2015. More needs of course to be done in both Greece and China to further facilitate the increase of Greek exports.

Up to what extent could Greek growth be based on the interest shown by Chinese companies to invest in Greece?

A basic pillar of our plan to put the Greek national economy to a sustainable path is the attraction of foreign investments for our privitization programme. In particular, this programme aims at transferring assets for usage to the private sector which had been previously owned by the Greek state. This can be beneficial for the country. In the short-term government revenue will be increased and debt will be reduced. In the medium and long-term more wealth will be created in the Greek economy through ongoing investments and the creation of job positions. As long as growth potential will be created, new revenues will be partly returned to the Greek state benefiting thus all citizens.

In this context, capital investment dynamics from China is particularly significant. This can be better understood if the existing development partnerships in Greece are combined to the Chinese capital flown into the privatization programme of Portugal. The investment of COSCO in the port of Piraeus has certainly forged Sino-Greek cooperation. Additionally, the impressive increase of freight volume as well as large investments by other companies such as ZTE and HUAWEI demonstrate advantages stemming from Sino-Greek co-operation.

Higher growth possibilities create now tangible prospects for a next round of investments. Apart from freight, new themes of co-operation are on the agenda. These include the cruise sector, the ship repair zone, international airports, and, of course, shipping.

What does it mean for Greece – at the political and economic level – to gain the confidence of China?

Over the last decade, Greece has sought and achieved significant international strategic partnerships. The current government continues the same policy having similar dedication and intensity. This collaboration goes beyond tangible economic benefits. It also has an unquestionable political impact. It demonstrates that Greece can play a new dynamic international role which is – inter alia – based on the confidence shown by Beijing. In that regard, Greece can reposition itself on the map of investment destinations.