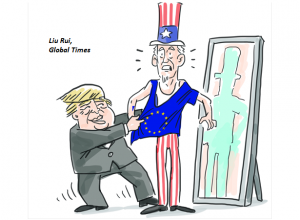 Transatlantic relations have gone through different stages. The Barack Obama period will be certainly remembered as one of harmonious cooperation, especially when it is compared to the administration of George W. Bush. Nevertheless, the continuity of this harmonious cooperation cannot be taken for granted if Donald Trump wins the US presidential election in November.

In his public rhetoric, Trump does not seem to count on Europe or to value the role of the EU in the world. He has joined the debate on Brexit, for instance, suggesting that he “would probably want to go back to a different system” if he were from Britain. He considers NATO an “obsolete” organization and has called on countries that do not pay proportionally with the US to leave the alliance, generating serious questions about his future commitment to Euro-Atlanticism. More importantly, he downplays the risk of a disintegration of NATO.

There are also other examples outlining Trump’s difficulty in cooperating with some European politicians. His public dispute with the newly elected London Mayor Sadiq Khan is indicative. His plan for a temporary ban on Muslims entering the US creates many questions on how he will deal with Europe’s attempt to deal with the refugee crisis.

It is not a rare phenomenon for politicians to invest in populism or different ideas during pre-election periods and to exercise a more orthodox policy after they assume power. Trump has already started to reconsider or reformulate some of his controversial public remarks made in speeches and interviews.

Nevertheless, his future policy as a potential president cannot be now anticipated. A billionaire winning the US presidency due to his atypical political communication might be prepared to stick to some of his pre-election arguments and make changes. The system of checks and balances in the country imposes limitations on every president, but cannot prevent them from adding their personal tinge to foreign policy and other issues.

Trump pays much attention to the economics of international organizations and believes that the US should let others defend themselves. However, he is not economical when the US defense policy is concerned and does not exclude the possibility of a US military intervention abroad, for example against the Islamic State and “radical Islam” as he openly calls it.

What is therefore expected is that the US will look for new partnerships – including with China and Russia – according to the country’s national interest per specific region of the world. Such an approach will undermine the role of the EU as a unitary actor and pave the way for a close cooperation between the US and specific European countries.

This tendency was evident during the Iraq war of 2003 and might be possibly repeated in the future. In such a scenario, member states which do not seek to align with Trump’s foreign policy “based upon US interests” could either prefer observer status under an EU umbrella or even look for their own closer partnerships with countries such as China and Russia. The “16+1” framework, for instance, would gain more supporters. Even the Eurasian Economic Union could open easier its doors to some European countries for stronger economic cooperation.

Some recent opinion poll data of the Pew Research Center show that Americans might not necessarily disagree with Trump’s foreign policy vis-à-vis NATO and the EU. Specifically, although 77 percent of respondents in the US say being a member of NATO is good for their country, 37 percent argue that this is more important to its other member states and only 15 percent to the US. Additionally, only half of the public, 52 percent, believe that US ties with Europe are most important with the percentage of young adults lower. Bruces Stokes, director of global economic attitudes at the Pew Research Center, describes this in Politico as a “grim reminder that Europhiles could be a dying breed in the US.”

All in all, Trump could push transatlantic relations toward uncharted waters if elected president. But there is one parameter that could influence his international affairs approach in the end. In politics, unexpected developments and crises require a readjustment of thinking. The repercussions of a potential Brexit along with the continuation of terrorist attacks in the Old Continent could possibly lead Trump to revalue the importance of stability in the EU and of the US contribution toward it.