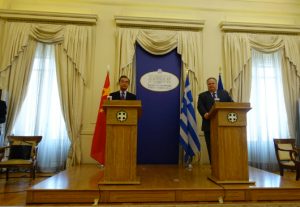 China is a trusted and firm friend of Greece. The visit and our bilateral meeting are taking place on the occasion of the Ancient Civilizations Forum, which starts today with a cultural event and with the scientific Conference, and will continue tomorrow with the Ministers’ consultations. And we are also pleased to have our friend the Minister here with us because this year, 2017, is the year of cultural exchanges between Greece and China.

Our culture and our relations are based on soft power; on the fact we are two countries who shaped the cultures of our regions. For thousands of years, China was the centre of the world in Southeast Asia and throughout Asia, and influenced the world. Greece was the Acropolis of the western world, and in particular of European civilization.

This year mark’s 45 years of Greek-Chinese diplomatic relations and the 11th year since a strategic partnership was formed between us.

We all remember the great work of Nikos Kazantzakis on China, his travel memoires, and we know, traditionally, how much the Greeks appreciated and admired Chinese culture and the China that endured through the millennia.

Today we have strategic cooperation that is also expressed in the support Greece gives – small in size, but significant – to the ‘One Belt, One Road’ policy, which is a policy that expresses what the Chinese President dubbed the ‘Chinese dream’.

China is today a country that is not just on the rise, but that, through plans such as this, shows that it has a vision and strategic outlook for a world of stability and peace, which is also what Greece wants.

We talked in particular about our cultural, educational and economic relations, about the importance of the sea and the sea road in the ‘One Belt, One Road’ plan, which is expressed through shipping, trade and tourism.

We have made joint efforts to stabilise our region and the world. As my friend the Minister also said, what characterizes Greek-Chinese relations is stability in an uncertain world.

We talked about the importance of the Port of Piraeus and the Cosco investments. The educational and research cooperation we have. We discussed the need for the European Union to develop its relations with China as well. I talked about and explained to him Greece’s view of the region’s problems and the actions Greece is taking as a state and country of stability.

Once again, I want to thank my friend the Foreign Minister of China, Wang Yi, for accepting my invitation. I want to thank him for the fact that we co-signed the invitations for something that will begin this evening. You all know of my weakness for Chinese history, as I taught Chinese foreign policy for 30 years, and of course, as a professor, as well, it is a great pleasure for me to have here the Foreign Ministry of a country whose foreign policy I taught. And I must say that our relations are even better now than when I was teaching about them.

Welcome and thank you, my good friend Wang Yi.

WANG YI: I am very pleased to be visiting Greece at the invitation of my old friend, the Foreign Minister of Greece, Nikos Kotzias, so that we can jointly inaugurate the 1st Conference of the Ancient Civilizations Forum.

I agree completely with the Greek Minister’s assessment and presentation of our bilateral relations and of the results of our talks.

This year is the 45th anniversary of the establishment of Chinese-Greek diplomatic relations, and with the dynamic support of all of the sectors of the two countries’ societies, our bilateral relations have always developed smoothly and steadily, and they continue to do so. We are satisfied at the current level of our relations.

Greece was one of the first European Union countries to conclude a strategic partnership agreement with China, and it is one of China’s most trusted partners in the European Union. The two sides have always supported one another on issues bearing on each other’s fundamental interests and priorities. This is a very solid foundation for the further development of our bilateral relations and a very good tradition as regards the ties between the two countries.

During our meeting today, we confirmed that we will continue this tradition.

As two ancient civilizations, China and Greece always appreciate, support and assist one another, and I can say that the friendship between the two countries has had a firm foundation and popular ties for many years now.

Additionally, as trade partners we always bear in mind the principle of mutually beneficial cooperation, and we promote the further development of cooperation between the two countries in all sectors.

Moreover, the Cosco project at the Port of Piraeus, as the Greek Minister said earlier, is a true example of the success of our mutually beneficial cooperation.

We believe that this cooperation and the success of this project will contribute to the recovery of the Greek economy – help the Greek economy overcome the problems and, at the same time, send a dynamic and positive message to the world, as it shows the strength of Chinese enterprises and the desire of Greece’s Chinese friends to strengthen our friendship and cooperation.

Our bilateral cooperation really has extended into all sectors. It is multifaceted, and we agreed to cooperate even more closely.

We are willing to deepen our cooperation in the sectors of infrastructure, energy – including alternative forms of energy – science and technology, agriculture, maritime transport and shipbuilding, and in many other sectors.

I would like to refer to cooperation in the tourism sector. As the whole world agrees, Greece represents a very ancient and rich culture, and I think you have good reason to be proud of this.

In short, we will continue to make efforts to develop our bilateral relations. We hope that the steady development of Chinese-Greek relations will be able to help us confront the uncertainty in today’s world, and that the wisdom of our two countries’ ancient civilizations will give us the strength to deal with the problems of today. We believe that the further deepening of our bilateral relations will promote the true friendship between the two countries, despite their differences in size, population and social systems.

In spite of these differences, our bilateral relations can become a model of mutually beneficial cooperation and sincere friendship.

JOURNALIST: I am a journalist with the Chinese news agency Xinhua, and I have a question for the Greek Minister, Mr. Kotzias.

I know that tomorrow we have the Ancient Civilizations Forum and that from 13 to 15 May we will be having the ‘One Belt, One Road’ Forum, and I would like to know how Greece will contribute to the two Forums, now and in the future.

N. KOTZIAS: Both plans – what we will be doing tomorrow for the Ancient Civilizations Forum and the ‘One Belt, One Road’ – come from older times, “from afar,” as we say in Greece. And they show that the great ancient civilizations are still alive today and that cultures link people and are also economically productive.

I would say that tomorrow’s Forum is part of this road. Tomorrow we have the Foreign Minister of China and of other countries. On 14 and 15 May, in Beijing, the Greek delegation will be headed by Prime Minister Alexis Tsipras, whom I will be accompanying, of course.

I hope and believe that tomorrow’s discussion will show that the ancient civilizations are alive in contemporary reality and help us with their wisdom. That these civilizations are forms of soft power and can be part of the special industry that we call the ‘culture industry’.

On the other hand, the ‘One Belt, One Road’ plan is a road that has existed for centuries, if not millennia. I imagine that, tomorrow, our friend the Foreign Minister of Italy will remind us of the Venetian traders who used the Silk Route. Today this route is both a land route and a maritime route. On this maritime route, we have the honour of being the gateway to Europe.

I also want to say that, to me, this great Chinese plan has a visionary element. It isn’t just a material plan. It isn’t just investments, trains, roads. It is also, at the same time, the desire to link our worlds and our cultures even more closely together.

So my colleague Foreign Minster Wang Yi and I are two fortunate people who will be launching the Ancient Civilizations Forum tomorrow and then meeting again, in Beijing, for the other major event that is being hosted by the Chinese government.

JOURNALIST: A question for Minister Wang Yi. I want to ask whether the North Korea issue is a potential threat to the region’s stability, or whether it is – and whether you are treating it as such – an opportunity for closer cooperation with the United States, to the benefit of peace and economic development in Southeast Asia.

And if the latter is the case, whether you think there are forces that would want to undermine such cooperation. Thank you very much.

WANG YI: First of all, I would like to add a few words regarding the question the Greek Minister just answered.

I would like to thank the Greek government – Prime Minister Tsipras and Foreign Minister Kotzias – warmly for their dynamic support and positive participation regarding the ‘One Belt, One Road’ initiative.

We believe that Greece will certainly become an important partner in the process of implementing the ‘One Belt, One Road’ plan, and I believe that the Ancient Civilizations Forum, which will be inaugurated tomorrow, is in the same spirit. We hope that the discussion we have and the results achieved at the Ancient Civilizations Forum will impart fresh momentum to the ‘One Belt, One Road’ initiative.

Regarding the matter of North Korea, I would like to reiterate China’s firm and stable stance, which is that we insist on the denuclearization of the peninsula and we want to safeguard the region’s stability, as peace, the way of peace, is the only solution.

Although China is not at the centre of the controversies or disagreements that exist right now – as the key to the solution of the peninsula’s nuclear problem is not in the Chinese side’s hands – through a responsible stance on the peace and stability of the region of the peninsula, China has made and will continue to make efforts to reopen the peace talks between the involved sides.

Lately, we have made fair and constructive proposals that have met with ever greater understanding and support from more and more countries. If other sides have other proposals, we ask to hear them.

Lately, there have been a number of protests, clashes and ‘words’ regarding this issue, and we very much need the voices of peace and reason. China will not be easily influenced by various ‘voices’, and we will not abandon our duty. The Chinese side will continue to maintain contact and dialogue with all sides, playing a constructive role in the solution of the peninsula’s nuclear issue.

This issue is also of great interest to Chinese journalists, and I take this opportunity to respond to them as well. Thank you.