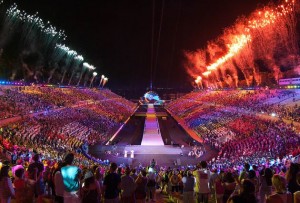 With 6,500 athletes and 2,000 coaches representing 165 countries, along with 30,000 volunteers and an anticipated 500,000 spectators, the 2015 Special Olympics World Games – being staged in Los Angeles July 25-August 2, 2015 – will be the largest sports and humanitarian event anywhere in the world in 2015, and the single biggest event in Los Angeles since the 1984 Olympic Games. The 2015 Special Olympics World Games, with the unparalleled spirit, enthusiasm, teamwork, joy and displays of courage and skill that are hallmarks of all Special Olympics events, will feature 25 Olympic-style sports in venues throughout the Los Angeles region. China, Cyprus and Greece have sent a large number of athletes to Los Angeles who will participate in the Olympic-style sports.