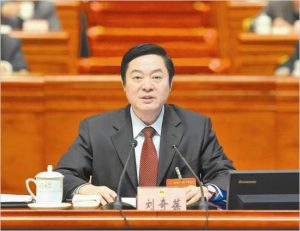 As Greece and China are strengthening their cooperation after the conclusion of the privatisation of Piraeus Port Authority, high level Chinese officials are visiting Greece. Following the participation of Foreign Minister Wang Yi in the Ancient Civilization Forum, which took place on 24 April 2017 in Greece, member of the Political Bureau and Secretariat of the CPC Central Committe, Liu Qibao, visited Greece. Liu is also head of CPC Publicity Department. During his stay in Athens  he met Greek Prime Minister Alexis Tsipras marking the beginninng of the Greece-China Year 2017.

The discussion between Tsipras and Liu focused on  cultural cooperation in the cinema and the audiovisual sector. As the Athens and Macedonian News Agency reports, Tsipras welcomed Liu, saying: ‘Your visit takes place after a series of high-level meetings, all of which signify the great interest of the People’s Republic of China for Greece’ and added: ‘Last week, we had the conference of ancient cultures at the initiative of the foreign ministers of the two countries. Today, you and the Greek Culture Minister will have the opportunity to inaugurate the year of cultural exchanges between Greece and China in the Byzantine and Christian Museum, a very important initiative. The basis for building trade and economic cooperation is cooperation in culture.’

From his part, Liu  conveyed the greetings of Chinese President Xi Jinping and Prime Minister Li Keqiang adding that he is looking forward to Tsipras’ visit next May at the forum on the new Silk Road. Regarding the forum on the ancient cultures, Liu said: ‘I think it is a very important initiative that can mark the beginning of very interesting things. There is currently a very good momentum for economic and cultural cooperation between our countries. In today’s meeting, we want to discuss with you our cooperation in the field of culture’.

Liu also met leader of the main opposition party (New Democracy) in Greece  Kyriakos Mitsotakis. Mitsotakis focused on the importance of the Sino-Greek strategic partnership. He also stressed that Greece ‘is a reliable partner for China being a stability hub in a turbulent neighborhood as well as a member of the European Union’. Additionally, Mitsotakis  acknowledged China’s significant international role for the protection of the environment and expressed his agreement with President’s Xi Jinping policy against protectionism. For his part Liu, concentrated on the commitment of New Democracy for the promotion of the Sino-Greek partnership and the launch of COSCO’s investment in the Piraeus port. In that regard, he reiterated his country’s will to further upgrade this investment.

Liu came to Greece after visiting Morocco and Hungary.  In Rabat, China and Morocco agreed to boost their strategic partnership. As Xinhua New Agency reports the decision of  President Xi and Moroccan King Mohammed VI to establish strategic partnership between the two countries last year has opened a new chapter in bilateral relations. In that regard, the CPC is ready to maintain friendly relations with Moroccan political parties and carry out discussions on national governance and party building. During his stay in Rabat, Liu witnessed, inter alia, the signing of an agreement allowing the broadcast of a Chinese television series as well as movies on the leading Moroccan TV channel 2M, the launching of a Chinese series dubbed in Arabic, and the opening of a visual exhibition at the National Library showcasing both the cultures of China and Morocco.

While in Budapest Liu attended an event where the Hungarian version of President’s Xi Jinping’s book The Governance of China was presented. Xinhua News Agency also pays attention to the common will of both China and Hungary to boost their cooperation within Belt & Road Initiative and the ’16+1′ framework.  Cooperation is focusing on economy and trade, culture and people-to-people exchanges. Moreover, during his meeting with Hungarian Prime Minister Viktor Orban, Liu also introduced new strategies of national governance put forward by the CPC Central Committee with Xi as the core since the 18th CPC National Congress. He said the CPC is willing to deepen communication with Hungary’s ruling Fidesz Party on ideas of state and party governance in order to promote the further development of Sino-Hungarian relations.