Marathon becomes another bridge of Sino-Greek friendship and cooperation 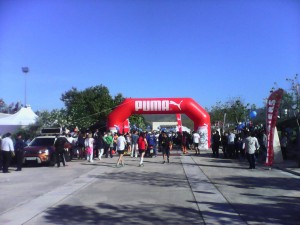 Correspondent of Xinhua New Agency in Greece Maria Spiliopoulou wrote an article covering the third annual Half Marathon race of the Marathon Municipality. This year’s edition turned into a new bridge of friendship and cooperation between Greece and China, as the Chinese Ambassador to Greece Zou Xiaoli was the chief guest of the event. Upon an invitation by the Marathon Municipality Mayor Ilias Psinakis, the Ambassador fired the starting shot for the 21.097-kilometer course, a 3-kilometer fun race and a relay under the warm applause of the cheering crowd. Mayor Psinakis was impressed when he learnt from the Ambassador that in China elementary and middle school students are being taught the history of Greece and the Marathon. ‘I feel very blessed to have the Chinese ambassador here. He loves his country and he loves Greece. We have many common ideas on how to bring together the two nations, China and Greece, two very old civilizations,’ the Mayor told Xinhua. ‘I was honored to be invited to fire the starting shot. Today I fulfilled a three-decade wish to be at the starting point of a Marathon race at the birthplace of the event,’ the Chinese ambassador said. ‘The Marathon race is not only a sports event, but a bridge of friendship between the two countries and people. This is a new beginning in bilateral collaboration,’ he told Xinhua.

The Xinhua article written by Maria Spiliopoulou is available here.