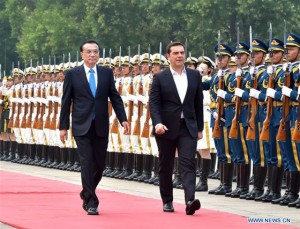 Greek Prime Minister Alexis Tsipras met his Chinese counterpart Li Keqiang met in Beijing on Monday 4 July 2016, with much of their meeting focused on Piraeus. Alexis Tsipras described Piraeus as a potentially important entry point for Chinese investment and goods into Europe. He said that logistics centers and industrial parks will be built and railways upgraded in central and Eastern Europe and underlined that the project is an opportunity for China and Greece to cooperate in shipbuilding, finance, science and innovation, food, tourism, culture and education. From his part, Li Keqiang said that China is ready for a second decade of the comprehensive strategic partnership with Greece, with sustainable and balanced trade growth and closer links in culture, education, science and tourism. Further to this, he reaffirmed that China firmly believes in European integration and that a prosperous and stable European Union benefits all. ‘We are looking forward to the upcoming China-EU leaders’ meeting to send positive signals for consolidating strategic mutual trust, practical cooperation and promoting facilitation and liberalization of trade and investment,the Chinese Premier said, welcoming Greece’s active role in China-Europe relations.

Earlier on Monday, China’s top legislator Zhang Dejiang met with Tsipras. Zhang, chairman of the National People’s Congress (NPC) Standing Committee, said the NPC is ready to further enhance friendly ties with the Greek Parliament on legislation and governance, at all levels.