Meeting between delegations of SYRIZA and CPC 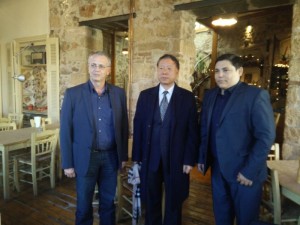 A meeting between delegations of the Communist Party of China (CPC) and SYRIZA party took place on Monday 14 December 2015 in Athens. The Chinese delegation was headed by Deputy Minister of the International Department of CPC Mr Fengxiang Chen. It met with SYRIZA representatives including Secretary of the Central Committee Mr Panos Rigas and member of the Political Secretariat and responsible for the Foreign and European Policy Mr. Yannis Bournous. The Chinese delegation was informed on the latest political developments in Greece and the current government policies.

As a member of SYRIZA Political Secretariat  relevant to the matter said on chinaandgreece.com, the delegation of CPC expressed a particular interest in Greece’s privatisation programme which has to be implemented according to the current bailout. Both sides confirmed the will to deepen the bilateral relationship while an official visit of a SYRIZA delegation in China might be scheduled in the near future to further enhance mutual co-operation. They also agreed that the international relations have to be based on mutual respect, the respect of national sovereignty and the avoidance of intervention in the internal affairs of other states.