Meeting between Foreign Ministers Wang and Kotzias in Beijing 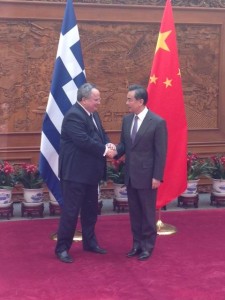 Chinese Foreign Minister Wang Yi has met his Greek counterpart Nikos Kotzias in Beijing on 25 March 2015. During their meeting, Wang Yi said that the mutual trust and support between China and Greece are the foundation of the bilateral comprehensive strategic partnership. Wang said China and Greece should expand the pragmatic cooperation and the two countries should make the ‘Piraeus port project’ an example of win-win cooperation. Wang also said China hopes to work with Greece to further promote the development of the China-Europe relationship.