Merkel and Schäuble to keep Greece in euro 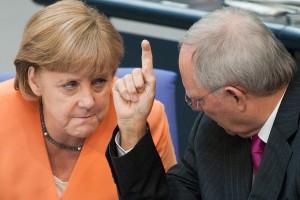 A lot has been already said and written about differences between Chancellor Angela Merkel and Finance Minister Wolfgang Schäuble as far as their approach vis-à-vis Greece is concerned. According to several commentators Merkel definitely wants to keep Greece in the eurozone while Schäuble might not be depressed with a Grexit.

But such an observation is rather misleading. Both the Chancellor and the Finance Minister want to keep Greece in the euro.  The only difference is their style. Merkel is mild when negotiating and talking to journalists while she seriously takes politics and international relations into account. For his part, Schäuble pays more attention to eurozone rules and numbers and puts high pressure on Greece in order to protect the credibility of the eurosystem.

Merkel and Schäuble have co-operated in a remarkably efficient way to avoid a Grexit and preserve the unity of the eurozone. In so doing, they have taken all necessary measures in order to anticipate wrong estimations and tactics by the Greek government. The architect of Greece’s catastrophic economic strategy in the last six months Yanis Varoufakis completely failed to realise that Merkel and Schäuble would be prepared for a Grexit – even if they would not like this to happen. So, while defending the unity of the eurozone, they let the Greek government give a final answer: euro or drachma.

Greek Prime Minister Alexis Tsipras – although at a very late state – acknowledged his mistake and landed into reality in a painful way. Merkel and Schäuble are now working hard to save Greece’s future in the euro following the path of law. After Tsipras sent a new proposal with austerity measures and reforms to the so-called Troika, they attempt to guarantee the sustainability of the Greek debt in order to give the possibility to the European Stability Mechanism (ESM) to accept Greece’s request for a new loan.

According to Article 13 of the ESM Treaty, the sustainability of the debt of a country, which requests stability support, has to be first assessed. The IMF puts the sustainability of the Greek debt into question risking a deadlock in negotiations. Germany as well as other eurozone countries are not allowed to accept a classical haircut. This is forbidden by the ‘no bailout clause’ of the Lisbon Treaty . Within this context, they are looking how they might be able to reduce the Greek debt in a way that might be legal and efficient. Technical methods include a reprofiling and a prolongation of maturities for the repayment of EFSF loans.

While the Greek government is attempting to overcome internal problems and publicly admit the truth after months of lies, Angela Merkel and Wolfgang Schäuble make their last efforts to safeguard Greece’s European future.