What now for China’s MES after the EP resolution ? 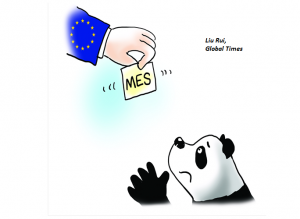 This is a critical year for the Sino-European partnership. One year after the 40th anniversary of the establishment of their diplomatic relations, China and the EU are facing new challenges which can possibly foster their bilateral cooperation. In particular, while the former hopes to automatically acquire a market economy status (MES) in December and is lobbying toward this direction in Europe, the latter finds itself in a dilemma. Several powerful European countries are positively predisposed but some companies, industries and trade unions remain rather skeptical.

In the first months of 2016 the European Commission organized an online consultation on the matter, documenting hesitance by relevant stakeholders, especially from the steel sector.

More importantly, a recent resolution of the European Parliament shows a wide consensus among MPs to block China’s ambition. According to it, the country must fulfill all necessary criteria before being granted MES.

In other words, the resolution reflects a European concern that China’s costs and prices will not necessarily be market-based and that European industry will be damaged by the subsequent inability of the EU to impose anti-dumping measures.

China has strongly criticized the recent news from Brussels. Its ambassador to the EU, Yang Yanyi, for instance, called on member states to moderate their tone and take a constructive attitude. From the perspective of Beijing, its accession agreement to the WTO in 2001 provided for it to be granted MES in 15 years’ time. In that regard, the stance of the European Parliament is almost incomprehensible in China.

Does all this mean that Europe will refrain from recognizing China’s MES? I don’t believe so. Although the European Parliament resolution has been largely played and reproduced in Western media as a signal of opposition, it is not a legislative one. It is a consultative statement, not a binding one. Therefore, the final decision remains in the hands of heads of member states.

EU leaders cannot, of course, ignore the will of the European Parliament and proceed alone. However, they might take into account its reservations and proceed accordingly in order to forge a decision that will serve the EU interests and also its harmonious cooperation with China.

Even the European Parliament resolution itself acknowledges the importance of China for the EU as “the main engine of profitability for a number of European industries and brands.” Furthermore, it is important that it advocates for the finding of a midway solution by asking the commission to coordinate with other major trading partners to come to a joint interpretation of WTO law.

A mutual understanding is a critical parameter in relations between partners. On the one hand, the EU could finally decide to acknowledge China’s MES but also introduce some protection measures for vulnerable sectors until the country responds to all requirements. This compromise might leave the majority of European politicians, MPs and policy-makers satisfied in the framework of the ongoing lively debate.

On the other hand, China would not immediately benefit from all the privileges of a MES country in relations to Europe but could enjoy most of them in the medium-term and perhaps all of them in the long-term. In the final account, it is more important for the Chinese administration to accept a compromise that will keep its image in the Old Continent positive than to push toward a MES recognition which might be possible but could generate a wave of reactions against it.

Recent history suggests that China can count on the support of the EU on economic affairs. That is because Brussels supported Beijing’s cause at the IMF level and the inclusion of the yuan in the IMF’s Special Drawing Rights (SDR), even  acting independently from the US. If both sides can make some concessions, a similarly happy outcome is possible.