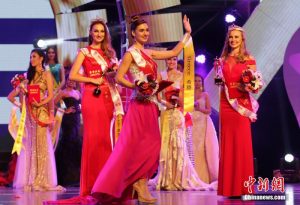 Katerina Bosklaviti of Greece has won the title of Miss City Tourism International 2016 contest which took place in China.  She also won Miss Photogenic title in the pageant.  The contest saw participation by girls from many corners of the globe. Katerina Bosklaviti has studied physiotherapy and loves traditional dances, cinema and travel.  She had won Miss Thessaly 2015 title in past.